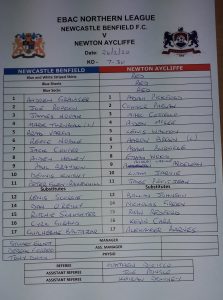 First half summary – even stevens, with both defences on top.

Second half summary – Aycliffe bossing much of the 45 minutes, a couple of times coming within a whisker of scoring, just unable to get the ball over the line.

A point salvaged by Benfield, three points squandered by Aycliffe (despite their best efforts).

The highlights of the first half were:

The first half closed with 10 minutes of play mostly in Benfield’s half, with Aycliffe not really threatening the goal.

However, the visitors cranked it up from the off in the second half, creating chance after chance in a frantic 15-minute spell.

Lewis Walton dribbled past two defenders before passing to Ardelean whose shot was deflected and scooped over the bar.  Ardelean then got on the end of a chipped ball into the box, but the No. 9 couldn’t get any power in his header.

The visitors kept applying the pressure:  Jarvie seeing a shot blocked with his arms by Grainger and then another Ardelean shot that crept tantalisingly close to the line before a last-gasp clearance by Benfield left back James Novak.  A minute later Ardelean had a header hit the right hand post before spinning across the goal line and then cleared by the Benfield defence.

It took Benfield more than 20 minutes to get any attacks of any note going, but Aycliffe were still creating the better chances.

The representatives of the Royal Corps of Ground Hoppers were left frustrated in the 75th minute when Walton ran at goal to the shouts of:  “Hit it!  Hit it!” only for the No. 5 to take too many touches and the chance was gone.

Benfield’s best attack of the half came with 10 minutes to go – sub Cyril Giraud knocked over a cross from the right but it was just too high for Knight and he got under the ball and headed it over.

In the first minute of time added on Aycliffe No. 11 Jake Petitjean placed a glancing header wide right and we were done for the night. 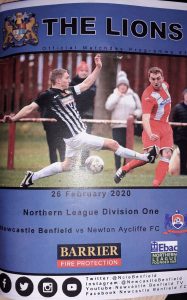