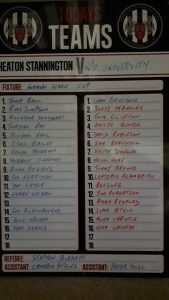 Twenty goals in two games on consecutive nights.  Not a bad haul and it seems churlish not to be completely happy, but both games demonstrated that a competitive edge (or lack of one) is an important factor in the enjoyment of a match, especially for the neutral.

They used the game as an opportunity to see how well some of their squad players might fare with the rigours of the Northern League and it showed, with a lack of cohesion and understanding between players.

The Stan took full advantage.  They were ahead in the 5th minute and never looked back.  It was University’s lack of understanding that gifted the first goal:  right back Jonty Manning and keeper Shaun Backhouse dithered over who should deal with a ball rolling into the box; Dan Sayer stuck a foot out to lift the ball into the net.

It was 2-0 in the 18th minute when a cross by Regan Paterson (who had a particularly good game) was inelegantly bundled in (* see notes) by Richie Hoggins.  Paterson won them the penalty that extended their lead.  As he tried to take it across Backhouse, the keeper made contact with him, bringing him to the ground, with Joe Kerridge scoring from the spot.

It was only two minutes into the second half when Paterson extended Heaton Stannington’s lead.  Sayer sent over a cross from the left behind the back four and the No. 7 fired it in at the far post.  Seconds later it was 5-0.  Ryan Bailey lifted the ball over Newcastle University’s back line to Kerridge who beat the offside trap before bending the ball round Backhouse and into the net.

There was still plenty of time for another couple of goals.

On the hour mark Hoggins knocked the ball back for Bailey who placed it just inside the right hand post and then with 15 minutes to go Paterson got his second to make it 7-0, thanks to referee Stephen Birkett playing a good advantage.  Sayer was fouled outside the box but the ref kept play going, allowing the ball to get to Paterson who planted it past Backhouse – a good night’s work wrapped up for The Stan.

Not many University players grabbed their chance to shine.  They found it particularly difficult to break through the Heaton Stannington back four, with most of their efforts either half chances or off target shots.

They came closest to scoring in the 77th minute when a dipping shot by Keith Douglas was tipped over the bar by Ball, with defender David Robinson putting a header from the subsequent corner wide.

After being substituted, Hoggins described how he’d scored to a spectator:  “….in off both shins and both knees….”

I pondered whether the technical areas (see photo) at Grounsell Park are the biggest in the league.  There’s certainly plenty of space for the managers and coaches to stretch their legs.

And finally, what must be one of the results of the season: Ryton and Crawcrook beating Stockton Town. 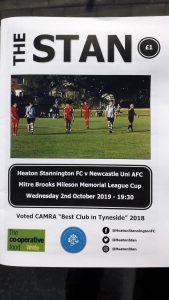 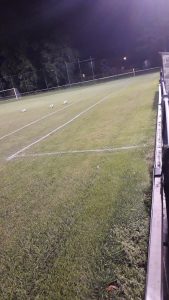