But who’d be a goalie?

There was much to commend this game – the pace, the passing, two sides with game plans, good team work and some excellent defensive work.

However, the game centred around a couple of players.  Two strikers did what they’re meant to do.

In the 19th minute, West Allotment Celtic No. 9 Matthew Hayton produced a goal out of not very much.  His team mate Liam Beeston tried to turn the University defence only for his shot to hit a defender.  Fortunately for the visitors it fell to Hayton who turned a half chance into a quality goal – striking the ball first time round a bunch of defenders and finding the tightest of gaps between keeper Daniel Dekanski and the right hand post.

And for the rest of the game it looked as though that was going to be enough to secure Allotment all three points.

University No. 10 Niza Chilufya then dramatically snatched two points away from them with an equaliser in the last minute of the match – by being in the right place at the right time to stroke the ball into the net from only a couple of feet away from the Allotment goal.  But his good fortune was at the expense and misfortune of Allotment keeper Finlay Hodgson who dropped ball into the box from a corner, giving Chilufya his chance.

It was a tough, eventful, turbulent evening for Hodgson; four minutes before the goal he needed treatment after being on the receiving end of a late tackle by University’s No. 6 Ehizojie Oifoh who was lucky to be only booked for the challenge.

Chilufya’s late equaliser made amends for missing a bit of a sitter as early as the 9th minute when he somehow managed to hit the ball against the right hand post with the goal gaping.  At half-time it was a case of defences being able to snuff out just about every clear cut scoring opportunities, with both keepers rarely called on to make a save.

But in the 78th minute Hodgson pulled off the save of the game.  The ball dropped for University full back Adam Redford 25 yards out from the Allotment goal and his shot looked to be flying into the net only for Hodgson to get his fingertips to the ball to knock it over the bar.  It’s the way of football, that people are more likely to remember his mistake right at the end than the quality of the save; such is the life of a keeper.

West Allotment were the best side in last season’s abandoned season and they’ve picked up where they left off: second in the division – only two points behind Crook with a game in hand.  Meanwhile, Newcastle University had a solid season last season and they look as though they’ve stepped up a gear and are among a whole host of clubs who look as though they’ll be pushing for promotion. 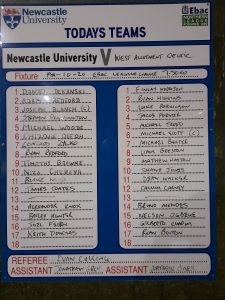