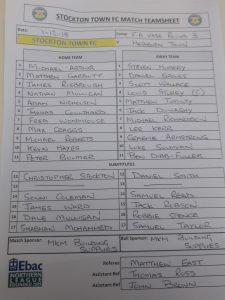 As soon as you got in the ground, there was a “this is a big, important game” atmosphere.  Plenty of fans and plenty of scarves, flags and banners aplenty and two Ebac Northern League teams pitted against each other.  It lived up to expectations.

The first half was a wonderful display of quality technique by both teams – good first touches, intelligent off-the-ball runs and astute passes in front of team mates allowing them to run forward at pace.

The quality of the technique may have dipped in the second half but the tie more than made up for that in pure cup drama.  And when most of the goals came, they came in mad, frantic blitzes.

Stockton made the early running but it was their keeper Michael Arthur who had to pull off the first save of the game.  A Hebburn cross from the right evaded everyone in the box until it reached Luke Sullivan who made a far post run.  He connected and Arthur had to be at his best to keep it out.  That was immediately followed by their left back Scott Wallace being allowed to make a 50-yard run to the heart of the home defence.  His deflected shot only just scraped past the outside of the Stockton post.

Former Team North man Ben Dibb-Fuller opened the scoring in the 17th minute with a crisp, sweetly-struck shot after being given too much time and space on the edge of the box.  Slack defending cost Stockton a second goal too – with three minutes to go before the break, Lee Kerr prised open the Stockton defence with a through ball and Michael Richardson was allowed to run past the defenders too easily before putting it past Arthur.

In between the goals, each team came close to scoring:  Michael Roberts was about to get a clean shot on target until Jack Donaghy dived in with a crucially timed tackle.  In the 25th minute Sullivan had a shot that moved; it looked as though Arthur was going the wrong way but the Stockton No. 1 was able to turn back and get a hand to it to send it out for a corner.

At the other end Hebburn keeper Steven Hubery was in equally good form.  In the 37th minute Roberts couldn’t quite believe he didn’t score when the keeper dived down to his left to deny the Stockton No. 9.  Roberts got within millimetres of getting on the score sheet a minute before the break.  He lobbed Hubery and the ball looked certain to go in until Donaghy sprinted back to hook the ball up and out from under the bar.  Despite strong Stockton appeals, the officials decided it hadn’t crossed the line.

Stockton made loud penalty appeals in the closing minutes of the half – both waved away by the referee.  Undaunted, for the first 20 minutes of the second half they were in the driving seat, forcing Hebburn to defend deep and in numbers.

Against the run of play Hebburn went 3-0 up with a quick counter attack.  In the 67th minute a Stockton defender missed a tackle, allowing Richardson to run down the right of the Stockton box before laying on a cross for Dibb-Fuller to fire into the net.  Seven minutes later the Tynesiders were five goals to the good.

Louis Storey managed to get ahead of the defence and latch on to a Richardson free kick before edging it past Arthur and then just four minutes later they made it 5-0 despite yet another excellent save by Arthur, he was able to stop one shot but after blocking the ball, it fell to Dibb-Fuller who thumped the ball in to complete his hat-trick.

Remarkably, Stockton managed to score three unanswered goals in the last 10 minutes of the game.  The first came after Adam Nicholson sent a long pass up to Fred Woodhouse who controlled the ball before sliding it past Hubery.

The Stockton No. 9 double his tally in the second minute of added time and yet there was still time for Peter Bulmer to score Stockton’s third in the 93rd minute with a half-volley.

It was a thrilling comeback, it just came far too late.

Eight goals were more than enough for the crowd of 427.  They certainly got their money’s worth.