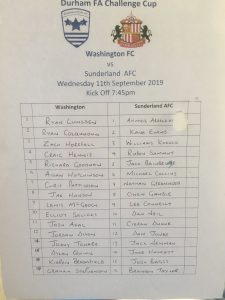 Sunderland U23s stuck five past Washington as they cruised into the next round of the Durham Challenge Cup at New Ferens Park.

Four minutes later the visitors doubled their lead when Williams Kokolo played a one-two with Greenwood which sent the left back through on goal, before he slotted the ball under Lumsden.

The away side had another chance to extend their lead five minutes before half-time when Lee Connelly ran onto Jack Bainbridge’s long ball, however he could only send his effort wide of the target.

Sunderland went into the break two goals to the good after a dominant first half display, while Washington struggled to create any clear cut chances.

Four minutes after the restart, the visitors increased their advantage when Owen Gamble slid the ball through to Greenwood, who then squared for Connelly to tap home.

After the away side’s fourth goal, Washington grew into the game and started to cause the Sunderland backline some problems.

The home side pulled one back in the 61st minute, when Craig Hennis picked up the ball on the edge of the box and curled his effort off the post and in, leaving Black Cats keeper Ahmed Abdelkader no chance.

Despite Washy’s improved second half performance, the away side added another 70 minutes in, when Neil’s strike was saved leaving Connelly to tap home the rebound.

The tempo dropped for the last period of the game, as Sunderland retained the ball and reduced Washington to very few chances.

Sunderland progress to the next round of the Durham Challenge Cup after a professional performance, however Washington can be pleased with how they responded in the second half despite defeat. 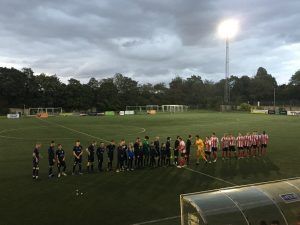