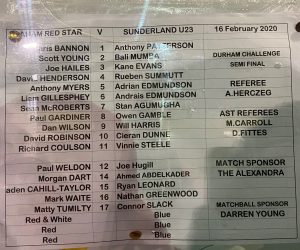 Sunderland saw off Seaham in the semi-final of the Durham Challenge Cup, where they will play Spennymoor Town in the final.

The visitors got off to a great start when Stan Agumugha tapped in from six yards out, after a scramble in the box, to give Sunderland the lead a minute in.

Seaham took control after they fell behind, going close to an equaliser when Dan Wilson’s header was saved by Anthony Patterson.

The hosts went close again a minute later, when Sean McRoberts effort was fumbled by Patterson, however the keeper did well to keep the ball out.

The home side drew level 33 minutes in, after a mix-up in the Sunderland defence from a corner allowed Liam Gillesphey to hit his shot low.  It was spilled by Patterson before rolling over the line.

Sunderland took the lead just before half-time, when Cieran Dunne ran onto Will Harris’ through ball before slotting beyond Seaham keeper Chris Bannon.

The away side increased their advantage 54 minutes in, when Agumugha’s deflected effort fell into the path of Harris, leaving him to tap home.

Seaham pulled a goal back 10 minutes later, when Paul Gardiner struck the ball home, after a scramble in the Sunderland area.

Sunderland hit back with 20 minutes to go, when Harris laid the ball off to Dunne before he curled his effort into the top corner.  The home side went close again in the 79th minute, when Gillesphey’s header was well saved by Patterson.

Sunderland held on for the win to progress to the final, where they will face Spennymoor Town in what should be an entertaining game.