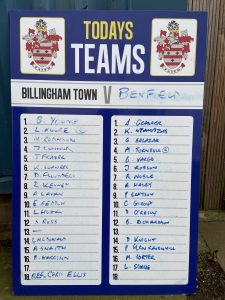 Substitute Dennis Knight scored a brace to spark a comeback as Newcastle Benfield left Billingham with all three points.

Billingham had the first real chance of the game when Luke Hogan’s cross found Dan Flounders, however he could only put his effort over the bar from six yards out.

The away side went close 20 minutes in when Paul Brayson’s low effort was saved by Bradley Young, before he put the rebound over the bar from about 5 yards out.

The hosts responded a minute later when Matthew Robinson’s cross found Lee Moore, however Andrew Grainger pulled off an excellent save to keep the scores level.

Just before half-time the visitors went close again as Brayson’s cross was met by the head of Cyril Giraud but he could only divert his header wide.

Billingham were awarded a penalty in the 55th minute, when Brad Varga brought down Ash Lavan in the area.  Elliot Beddow stepped up and placed his spot kick into the bottom right corner to give the home side the lead.

With 15 minutes to go, Benfield equalised when Brayson chipped the ball to substitute Dennis Knight who chested and volleyed on the spin into the corner from the edge of the area.

Knight went close to his second of the game three minutes later when his free kick from 25 yards out struck the outside of the post.

The away side were awarded a penalty in the 90th minute after Brayson was brought down, which seemed a dubious decision, in the area.  Knight stepped up and smashed the ball beyond Young to complete his brace and secure all three points for his side. 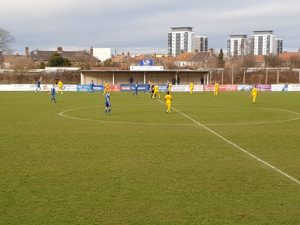