THE ART OF FINISHING (PART II) 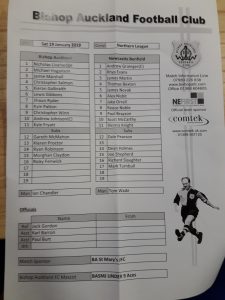 The midweek meeting between Consett and Shildon was all about the finishing.  Bishop Auckland and Newcastle Benfield provided the sequel four days later.

Benfield played a game that was pleasing on the eye, spraying the ball around the pitch with the minimal of touches.  Their game had a rhythm and flow to it.  They also had a bagful of shots.  They only problem was that they couldn’t despatch them.

That was something that didn’t trouble Bishop Auckland.  They had their fair share of attacks and shots – perhaps not quite as many as the visitors – they just made the most of them.

First up was Kieran Galbraith.  The No. 5 is a tall, big bloke who you expect the defence to mark at set pieces, but as a corner came over in the 11th minute, no-one picked him up and he had a clear header after being gifted all the time and space he needed to pick his spot. 1-0.

In the closing minutes of the half, Kyle Fryatt made it 2-0.  The No. 11 was allowed to twist and turn in the Benfield box before hitting the ball with the outside of his boot.  With not much to aim at, he curled it past Benfield keeper Andrew Grainger.  It wasn’t quite two chances and two goals in the half, but it wasn’t too far short.

Bishops captain Andrew Johnson provided the third clinical finish in the 68th minute with the sharpest of sharp turns, followed by a shot that Grainger managed to get a hand to, but not enough to keep it out of the net.  3-0.  It proved to be the killer blow.

Benfield’s chances: 10’ a Scott McCarthy shot smothered by Bishops keeper Nick Liversedge.  14’ – a run by McCarthy beating three Bishops players but James Martin skies his shot over.  18’ – an excellent cross by Martin that Dennis Knight miscues badly at the far post, sending the ball back across the goal instead of on target.  20’ – Alex Nisbit putting a header wide.  21’ – Knight putting a first time shot wide, immediately followed by a more difficult header by Nisbit, also going wide.  31’ – McCarthy unable to get enough power into a shot, allowing Liversedge to stop it.

One of their few shots to really test Liversedge came in the 43rd minute when Reece Noble’s shot forced the keeper to make his best save of the half.

In the second half:  49’ – a Jake Orrell shot deflected for a corner.  51’ – another Knight shot, pushed out for a corner by Liversedge.  53’ – McCarthy jinking between Bishops defenders, with his shot veering high and wide.  69’ – substitute Dale Pearson managing to find some space for a shot, palmed away for a corner yet again by Liversedge.

They finally broke through in the 71st minute when a long, crossfield ball looped over defenders and found Paul Brayson clear on the left.  His first-time shot gave Liversedge little chance of saving it.

The strike re-energised Benfield who clearly believed they could get something out of the game in the last 20 minutes, but Bishop Auckland were able to negotiate the remainder of the game safely.

Quote of the day:  Prompted by a Benfield player’s repeated complaints to the officials, one Bishops fan remarked:  “Linesman – do you want some ear plugs?  We’re bad enough, never mind about him!”