THE ART OF FINISHING 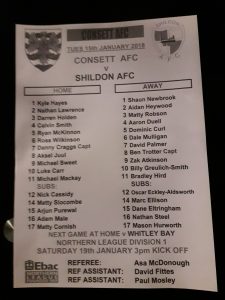 In the end it came to how clinical the two teams’ forwards were.  Self-evidently, Shildon’s front line edged it on the night.  Both their goals were pretty good too, in very different ways.

Just two minutes into the match Zak Atkinson put the visitors ahead.  There seemed to be no imminent danger to the Consett goal.  The Shildon No. 9 picked the ball up at the outside corner of the Consett box, paused just long enough to look up to spot and seize his chance – hitting a beautifully struck shot that sailed over Kyle Hayes and into the net.

His team-mates seemed as surprised as everyone else by the goal.

Fast forward more than an hour and the Railwaymen’s second was just a simple cross and header, but precisely executed by David Palmer and Billy Greulich-Smith – Palmer providing the pinpoint cross in from the right and Greulich-Smith finding the gap between Consett’s centre backs to attack the ball and head it in.

Apart from the goals, both sides came desperately close to adding to the scoreline.

Just like the opening goal, there didn’t seem to be too much on for Aksel Juul in the 8th minute until the Consett man turned left and hit a shot that bounced off the post with Shildon keeper Shaun Newbrook beaten.

Next up was Greulich-Smith who was allowed to run through Consett’s midfield with his shot from 25 yards out careering off the right hand post.

Apart from those chances, Shildon looked more dangerous when they attacked while Consett never really hit a rhythm, with much of their play looking somewhat rushed, when a bit of patience might well have served them well.

They looked more positive and energised for the opening 10 minutes of the second half, which was played mostly in the Shildon half.  I counted five chances/half chances and shots for Consett before Shildon doubled their lead, but none of them tested Newbrook.

Michael Mackay was the last player to rattle a shot off the post in the 68th minute and Juul had their last shot on target, but Newbrook had a straight forward save diving down to his right.

The last two shots came from Shildon:  Marc Ellison with an uncontested effort in the 83rd minute with Hayes forced into a one-handed save and then in the third minute of added time, substitute Nathan Steel finding himself all alone one-on-one with Hayes as Consett pressed forward, but the Consett No. 1 got his angles right to block the strike on goal.