The ebb and flow of this game made it impossible to predict the result at any point during the match.  It had all sorts of themes running through it:  each side having periods of superiority, only for the other team to fight back; a tough struggle between two very useful first division teams; some excellent passing and some full-on challenges.

In the end, with 88 minutes gone, Newton Aycliffe had one last chance to snatch the win and Ben Reay made the most of it by striking home, to thwart some stout Benfield defending in the last 15 minutes.

Wind back to the start and the opening 20 minutes set the theme for periods of superiority.  Aycliffe had a good opening five minutes – with Ben Dibb-Fuller forcing a diving save from Andrew Grainger, Benfield fought back, Aycliffe got back on top and then Benfield got the upper hand, with Chyril Giraud pulling a shot across the goal.

Aycliffe took the lead in the 20th minute when Jake Petitjean slid and stuck out a foot to get on the end of a free kick, with the ball sliding past the outstretched hands of Grainger.  Meanwhile, fullback Jake Turnbull was Benfield’s main attacking threat – being given space down the right to drive forward and send over a series of crosses.  Aycliffe didn’t heed the warning and were made to pay for allowing him so much room when, in the 33rd minute, his cross came off Lucas Pilling and into the net.

Things went from bad to worse for the hosts when a back pass set Paul Brayon up with only the keeper to beat.  Adam Pickford saved his shot but he couldn’t do anything to stop Giraud’s follow up.  Benfield went into the break 2-1 up.

Aycliffe were level only three minutes after the re-start when Ethan Wood ran left across the Benfield penalty area, then pulled the ball back on to his right foot to shoot across Grainger and into the net.

For much of the half, Benfield tried to get it up to the forwards as quickly as possible, while Aycliffe worked it through the team, pressing forward coming up against a well organised and solid Benfield defence.

But then, just when it looked as though they’d done enough to earn themselves a draw, Reay found himself in the right place at the right time to grab the win. 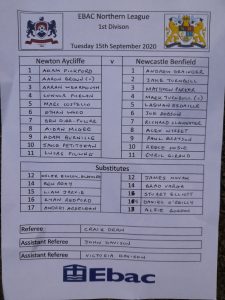