THE FAST AND THE FURIOUS – WHITLEY BAY EDITION

The game started at a fast and furious pace, and hardly let up for the rest of the match.  It was a tough, competitive 90 minutes that simply flew by.

Two minutes in and Aycliffe No. 9 Adam Burnicle was almost put through by Marc Costello, only to be crowded out by Whitley Bay No. 6 Liam Gillesphey and keeper Chris Bannon.  And the visitors should have taken the lead in the 6th minute when Sam Dibb-Fuller had a gilt-edged chance with a big target to aim for, only to put his shot wide right.

For the opening 15 minutes Aycliffe had a shorter passing game while Whitley Bay relied more on longer passes and balls forward, looking more dangerous down their right; but it was down their left that they came closest to opening the scoring.  Left back Jamie Dunn made a surging run, lost the ball to Aaron Brown, regained possession as Brown was caught waiting to pass it back to keeper Adam Pickford, allowing Dunn to hit the ball into the heart of the Aycliffe goalmouth with the ball cleared off the line by Callum Munro.

The numbers seemed to give the edge to the visitors.  Their defenders outnumbered Whitley Bay attackers, while they committed more men forward than the hosts when launching attacks.  That didn’t stop Whitley Bay creating their best chance of the half in the 32nd minute when a well-placed cross by Matthew Weirs was met with a header by Adam Shanks who put the ball only just over the bar.

There was no let-up to the pace at the start of the second half and Aycliffe took the lead three minutes after the re-start when Connor Phelan was brought down in the box, with Burnicle striking the penalty low and left, just inside the post to make it 0-1.

In the 57th minute Whitley Bay were level.  A corner was sent over the Aycliffe penalty area where it was met by Dunn at the right hand post with a towering header that went it just inside the opposite post, despite a last gasp attempted clearance by a defender on the line.

The visitors were awarded a second penalty four minutes later when Jake Petitjean was brought down in the area by his opposite number Scott Lowery.  Burnicle stepped up to take the spot kick but hit it too straight, allowing Bannon to save it with his legs as he dived and then he pulled off a second superb save from a follow-up shot as he tried to get back to his feet.

Shots in the 71st and 79th minutes by Aycliffe’s Jarvie and Lewis Walton were both put over the bar but it was Whitley Bay who scored the third and decisive goal of the night.  Lewis Orrell had one attempted cross blocked, the ball fell back to him and his second cross found Richard Coulson at the far post and he planted his header in.

The goal spurred Aycliffe on to attack with more urgency, trying to get the ball forward as quickly as possible but Whitley Bay were able to defend their lead to take the points.

As competitive as the game was, it was encouraging to see so few fouls and free kicks.  If I have one slight complaint is that too many shots were straight at either keeper.  There were more goals there for the taking for both sides.

But it was fast, furious and a credit to the fitness levels and skill of the players. 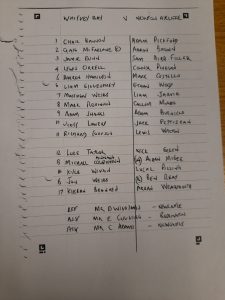 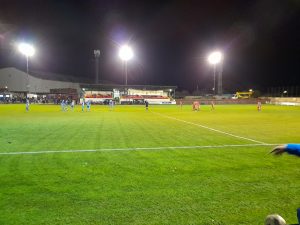