THERE’VE BEEN BETTER MATCHES THIS SEASON 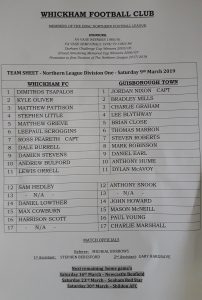 With 15 or so minutes to go, it seemed as though this could well be a game that was going to be decided by a defensive lapse or a bit of inspiration or quality.  Unfortunately, neither of those happened.

The football in the first half was about as welcoming as the weather (rain and strong winds).

Whickham in particular kept on being caught offside.  At the other end, Guisborough looked more likely to beat the offside trap but they were equally as (un)successful as their hosts.

Whickham’s attacks kept on falling down around the edge of the Guisborough box, while Guisborough put several high balls up to their front players, which was meat and drink to the Whickham defence – in particular their No. 5 Matthew Grieve.

There was only one phase of football in the first half that was of any note: Whickham’s Damien Stevens hooking the ball into the six-yard box from the byline, with Guisborough’s Brian Close clearing it from under the bar.

Almost immediately afterwards, Town broke quickly, with Danny Earl rounding Whickham keeper Dimitros Tsapalos.  He hit the ball goal-wards only for right back Kyle Oliver to slide in and kick it out for a corner before crashing into the post for his troubles.

The second half improved, along with the weather.  It still wasn’t great – just better.  The main reason behind the improvement was that both sides tried to play a bit more football, keeping the ball on the ground and working it through midfield.

Both keepers had more work to do.  Jordan Nixon getting in the way of a Stevens shot in the 50th minute and Tsapalos getting his angles right to save a Dylan McAvoy strike in the 52nd minute.

At least Guisborough got the ball in the net when Mason McNeill back-heeled it from a re-bound, only to be flagged for offside (somewhat inevitably).  In the last five minutes of the match Stevens had two chances:  he finally beat the offside trap, managed to turn and shoot, but Nixon was able react quickly enough to get in the way; and then in the closing seconds Stevens put the last shot of the match just wide of the keeper’s outstretched hand as he dived to the right.

And that was our lot.  Not one of the better matches of the season.