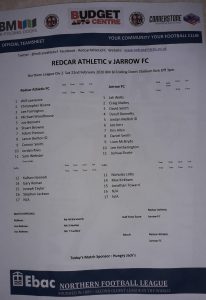 A realistic assessment by both teams will come to very different conclusion.

For Redcar Athletic it was a ‘points over performance’ display, while Jarrow will be frustrated with a game that they should probably have got something out of.

And points are certainly more important for Redcar and this result keeps them on course for promotion.

Overall, I’ve seen worse second division games, but I’ve also seen better.  For much of the 90 minutes the teams cancelled each other out.  A swirling wind didn’t help matters either.

Although they didn’t dominate the first half, Jarrow certainly controlled big chunks of it.  Redcar improved in the second half while Jarrow stuttered.  At the final whistle, Redcar keeper Will Lawrence had the muddier kit of the two No. 1s, but Jarrow didn’t test him as much as they might have.

The sides trading openings in the first 30 minutes, Jarrow looked the more dangerous of the two.  Lee Kerr had a long-range shot that Lawrence couldn’t keep hold of.  Liam McBryde prodded the follow up in but was ruled offiside.  Daniel Smith had an effort blocked by his counterpart Lance Skelton.  For Redcar, right back Christopher Bivens couldn’t’ keep a volley down and on target while Jordan Rivis had a free kick palmed down and then booted clear by Jarrow keeper Jak Wells.

Jarrow finished the half the stronger of the two but fell behind in the 44th minute when they failed to clear a Joe Bennett free kick and Rivis was in the right spot to boot a loose ball in to make it 1-0.

For more than 20 minutes after the re-start, neither team was able to impose themselves on to the contest.

The second half deadlock was broken in the 68th minute with a quick break by Redcar – No. 7 Adam Preston rounding a defender before striking the ball back across the goal and into the opposite corner.

Jarrow upped the pressure but couldn’t find a way past the Redcar defence, with Athletic getting plenty of men behind the ball when the visitors attacked.

As Jarrow pressed forward in numbers, they inevitably left gaps at the back and another quick break by Redcar almost produced another goal, with Kris Allen racing on goal – Wells preventing a goal by sticking out a foot to edge the ball out for a corner.

Jarrow gave themselves a late, late chance of getting something out of the game with a goal in the 88th minute.  A shot by Lee Hetherington bounced in front of Lawrence who managed to get a hand to it but couldn’t stop it going in.

But any hopes of a dramatic finish were dashed when Redcar made it 3-1 with another breakaway goal in the 90th minute, Michael Woodhouse coolly finding the net after being set up by Preston.

A slightly flattering scoreline for Redcar, but they won’t worry too much about that. 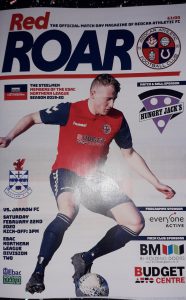 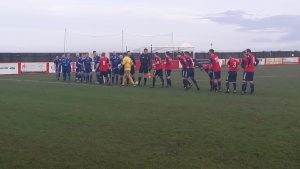