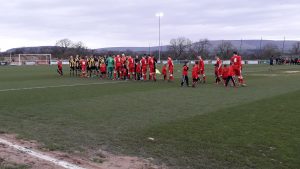 Hebburn needed the patience of Job to get through to the quarter finals of the Vase – and they put themselves and the couple of hundred fans who made to journey to Lancashire through the wringer in the process.

They were thwarted for almost two hours before finally securing the win, thwarted by a combination of squandering some great chances and some stout defending by Longridge.

Around the 30th minute I scribbled a note:  “For all their dominance, hope Hebburn don’t fall for the sucker punch counter attack.” And in the 35th minute added:  “Surely it’s just a matter of time before Hebburn score?”  It was a bit longer then I anticipated.

Olly Martin puts a shot wide.  Graeme Armstrong bundled over preventing a clear run at goal.  A Michael Richardson shot well saved by Longridge keeper Lee Dovey.  Armstrong shot from a standing start straight at keeper.  Martin shot blocked.  Armstrong claiming his shirt was pulled as he sent a shot over the bar.  Tom Potter shot blocked, with rebound falling to Richardson whose shot was saved by keeper.  Dovey making another save – of a shot by Armstrong just before half-time.

Hebburn went into the break having dominated the game, with Michael McKeown running the midfield, but the team unable to find the last killer ball.

Within five minutes of the second half, it was more of the same.

Dovey bravely diving for a 50-50 ball with Armstrong who was being well marshalled by Longridge defenders Joshua Heaton and Daniel Wilkinson.  Armstrong meets a cross by Martin but can’t get much power in the effort which goes wide right.  In the 76th minute the No. 9 is substituted to mark the end of a frustrating afternoon for the striker who’d worked his socks off for the team.

With 13 minutes to go, Richardson has a shot saved with his legs by Dovey and then the No. 10 sends a shot wide right.  Hebburn sub Cedwyn Scott puts a shot high and wide.  And then in the 89th minute, Scott has a shot cleared off the line and we’re into extra time.

Through most of extra time Hebburn laid siege to the Longridge defence.

Martin shot at keeper.   Potter looks certain to score only to see his shot cleared off the line.  Richardson free kick over the bar.  Scott manages to get behind the Longridge defence but a combination of Heaton and Wilkinson block his run.  The home team were tenacious in their defending but were hanging on by their finger tips.

Luke Sullivan has a shot deflected, with Dovey scampering back to cover his goal.

And then finally, Hebburn made the breakthrough, with only three minutes of extra time left.  They benefitted from a marginal decision by referee Daniel Locker to give a free kick on the edge of the box.  McKeown hit the ball through the wall and Dovey made his first and only mistake of the game – allowing the ball to spill out of his hands and Robbie Spence pounced to smash it home.  The relief was palpable, but Hebburn had more than deserved their good fortune with the free kick decision.

For the last couple of minutes, Longridge bombed forward in search of an equaliser, making it a nervous end to the game, but they held their nerve and held on to the lead.

The final whistle brought mass celebrations by the players, coaching staff and fans.  Everyone was exhausted by the drama.

So far, this blog has been all about Hebburn, but it wasn’t all one-way traffic.  Longridge had their chances too – albeit far fewer than the visitors.  Hebburn keeper Mark Foden didn’t have to make too many crucial saves, helped by the protection offered in front of him by Dan Carson and Louis Storey.

Hebburn join Consett in the quarter final draw, but it’s commiserations to West Auckland who fell just short in their mammoth journey to Plymouth. 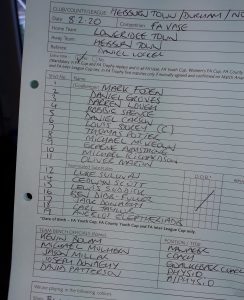 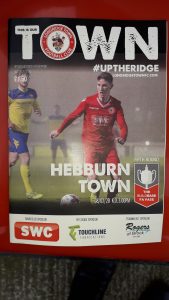 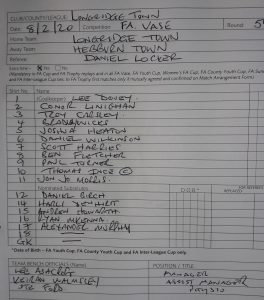 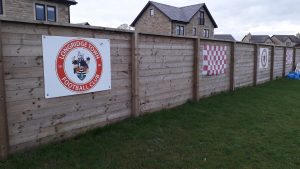