TWO DECISIONS MAKE ALL THE DIFFERENCE 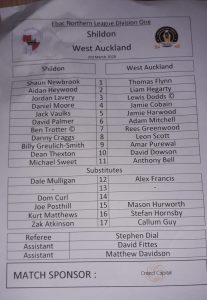 Two crucial decisions turned this game round for Shildon and kept their push for promotion on track.

Decision one – sending on Joe Posthill, with the substitute producing two pile drivers to seal a comeback.

And now for the nitty gritty.  There wasn’t much for me to report from the opening 20 minutes of the game, mainly because I was dashing from the Durham City v Sunderland West End game – postponed 15 minutes before kick off because of damage to floodlight cables under the pitch.

Fortunately, there were plenty of incidents in the remaining time of the half.

West keeper Thomas Flynn made two excellent saves within a couple of seconds of each other to stop shots by Dean Thexton and Billy Greulich-Smith.  With five minutes to go, West had a couple of promising possessions on the edge of the Shildon box without making anything of them.

That was to change in the 44th minute when West right back Liam Hegarty sent over a perfect cross which was met by a perfect header by David Dowson to put the visitors 1-0 up.

You would have expected a reaction to the goal by Shildon at the start of the second half, but it was West who were the stronger of the two sides for 10 minutes.   Once Shildon did get into their stride, the teams traded spells of possession, but neither keeper was kept particularly busy.

The first pivotal decision came in the 65th minute when Posthill replaced Thexton.  Seven minutes later, the No. 15 put Shildon back on level terms when he got on the end of a free kick to fire the ball past Flynn.

It took only another minute before Posthill completed his brace, cutting back in from the right before hitting another low, hard shot past the keeper.  It was an inspired substitution.

The second decision came with nine minutes to go.  West No. 7 Rees Greenwood was bundled over in the box, Purewal stepped up but had the spot kick saved by Newbrook.  I wonder how crucial those extra two points will be at the end of the season.