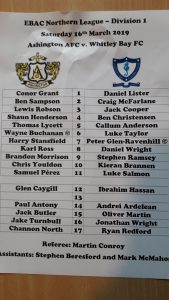 The weather had a significant effect on yesterday’s games.  Most of the 16 fixtures involving Northern League sides fell foul of the weather and consequent waterlogged pitches.  It was only hours of work by club officials that meant this game went ahead.

At kick-off the pitch looked in remarkably good nick considering the snow that had fallen.  But it was the wind that had a more direct impact on the football.

In the first half Whitley Bay had a good opening spell and finished the half with a flourish.  Sandwiched in between, Ashington dominated most of the possession with the wind at their backs and with much of the play in the Whitley Bay half.  It was role reversal in the second half – this time dominated by the visitors, with Ashington struggling to get anything going at all.

Ashington’s best chances came in quick succession in the 19th minute – both thwarted by Whitley keeper Daniel Lister:  the first getting a hand to a half-volley by Colliers captain Wayne Buchanan and pushing the ball out, the second from the subsequent corner as the ball was put under the bar, with Lister again punching it clear.

In the 40th minute Luke Salmon saw a shot skim off the bar for Whitley and that was followed up by a goal-bound shot by Daniel Wright, deflected for a corner.  In the 44th minute Ashington keeper Conor Grant tipped a Luke Taylor header over the bar.

As the half came to a close, Colliers right back Ben Sampson proved to be their main attacking threat – putting two shots over the goal and sending over a cross that was just out of reach for Sammy Perez.

Grant was quickly called into action in the second half – twice saving shots by Salmon in the 48th minute.  Ten minutes later Whitley Bay took the lead, thanks to lax defending.  A corner was sent into the Ashington box and Whitley No. 9 had a clear header that he planted into the net.

They should have made it 2-0 in the 66th minute when substitute Andrei Ardelean got behind the Ashington defence and took the ball into the box before being brought down by Grant, but Wright saw his penalty kick blocked by Grant.

In the second minute of added time Ashington had one final chance to score when Perez tried to get on the end of a through ball, but Lister came racing out to just beat him to the ball.  It wasn’t a great game.  The winner was probably the weather.