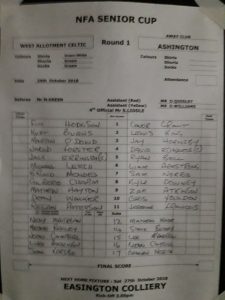 Division Two team West Allotment Celtic produced a stunning performance to dump their Division One opponents out of the Northumberland Senior Cup.

In the end it could have been more than a 5-1 win over Ashington.  By the end Ashington’s get up and go had got up and gone.

Allotment started well and never let up for the rest of the game, meanwhile Ashington didn’t seem to heed the early warnings of the chances that the hosts created.

Regan Paterson skied one chance in the sixth minute.  Six minutes later Bruno Mendes-Correia beat the offside trap, took it round Colliers keeper Conor Grant only for his shot to come back out after hitting the inside of the post.  Gilberto Chapim hit a follow-up shot from 30 yards out and only just missed the target.  Then Paterson had a glancing header go just wide of the post.  Three good chances within 90 seconds.

Ashington’s passing game was out of kilter while Jacob Forster, Mendes-Correia and Chapim were combining well in the Allotment midfield.

Allotment got the lead that their confident, positive started deserved in the 23rd minute.  A Matthew Hayton shot hit his own team mate – Dean Walker – who managed to get the ball back to Hayton.  He planted the ball in the net at the second time of asking.  They almost wrapped up the first half with another goal – Grant saving a Hayton shot and then Paterson just missing the target with the re-bound.

Two incidents in the opening minutes of the second half proved to be turning points.  Ashington substitute Channon North hit the bar with a header at a corner and Matty Wade somehow hit the follow-up over the bar with the goal gaping.

Within seconds, Allotment went up the other end won a (questionable) corner and an unmarked Michael Leech headed it in to make it 2-0.  From then on in, there was only going to be one winner of the match.

Grant made two saves in the 52nd minute to deny Paterson and Mendes-Correia efforts, but Allotment extended their lead in the 54th minute when Jack Errington was quickest to react to a free kick launched into the Ashington box to prod the ball in.

Mendes-Correia finally got on the score sheet in the 57th minute, showing great technique with a precise shot that found the corner of the net.  Allotment kept on creating chance after chance.  Paterson shimmied past three Ashington defenders and he was unlucky to see his shot come back out from the underside of the bar.  Hayton was first to the ball, but his shot went wide.

All over the pitch, Allotment players were winning most of the 50-50 tackles and were first to pick up any loose balls.  They got their fifth goal in the 69th minute when Kurt Burns sent over a long cross to the back of the Ashington box where Luke Parkinson was loitering with intent and he buried the ball into the back of the net with a first time shot.

In the 75th minute Ashington got a goal that could hardly be described as a consolation.  North broke down the right of the Allotment box and sent over a nicely weighted cross and Chris Youldon headed it in.

Apart from the score line, the only surprise on the night was how Paterson didn’t score a goal.  He had four opportunities alone in the last five minutes of the game.  Fortunately for him and the team, his misses didn’t matter.