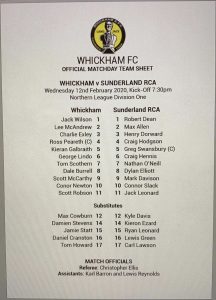 Whickham picked up a crucial three points to move off the bottom of the table after a second-half comeback at home against Sunderland RCA.

The away side had the first chance of the game when Dylan Elliot struck just wide of the right hand post.

RCA took the lead 35 minutes in when Elliot’s corner was met by the head of Mark Davison, who headed beyond Whickham keeper Jack Wilson.

The visitors almost doubled their lead a minute later, when Jack Leonard cut inside, however his strike hit the inside of the post.

RCA’s period of pressure nearly paid off again, when Davison’s free kick from 25 yards out was well saved by Wilson.

The away side almost scored their second, when Davison laid the ball off to Nathan O’Neill, however he could only send his effort over the bar.

Five minutes later Whickham equalised, as Damien Stevens picked up the ball on the edge of the area, before curling his effort into the bottom corner.

The hosts took the lead 82 minutes in, when Scott Robson burst down the line, before crossing to Tom Scothern to tap home.

Whickham added a third in the 89th minute, when Max Cowburn’s free kick clipped the inside of the post before hitting the back of the net.

Sunderland RCA were the dominant team in the first half, as they looked threatening in attack and solid in defence.

Whickham came out the blocks in the second half and were a different team to the one in the first, as they dominated the half and fully deserved the win.

Whickham move up one place to 19th, whilst Sunderland RCA remain 12th in the league.