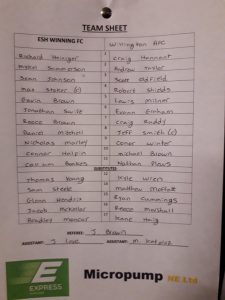 Esh Winning 0 – Willington 5, and the win was an emphatic as the scoreline suggests.  In fact the visitors could have had a few more.

Willington were as good as Esh were poor – especially in the first half.  By the interval they were four goals up and as fellow ground hopper Glenn Wallace commented early in the second half as they eased off the throttle:  “I think Willington have declared.”

They found Esh Winning’s weak spot and kept on exploiting it.  They kept pushing the ball between defenders and into the space behind the back four who played a relatively high line and square.  The Esh defence seemed incapable of adapting and combatting Willington’s attacks.

Willington came within inches of taking the lead in the third minute when Connor Winter was unlucky to see a shot come back off the post, roll across the goal line and go out.  He was more successful 10 minutes later when Jeff Smith exploited the gap behind the Esh back four, releasing Michael Brown and his cross was tucked away by the Willington No. 9.

In the 16th minute Brown beat the offside trap to get on the end of a Nathan Plews through ball and finished the move by slotting the ball under Esh keeper Richard Heiniger.  In the 19th minute Heiniger was able to tip an Evann Graham header over the bar.

With less than 10 minutes to go to half-time Willington thought they’d won a penalty when one of their players fell under a challenge to the right of the box.  The reprieve was short-lived.  Seconds later Brown was bundled over by Heiniger, the referee awarded a spot kick and it was converted by Winter.

That in turn was quickly followed by a cross by Smith, with Winter only inches away from connecting with the ball as he ran towards the six yard box.  At this point the Esh Winning defence was being run ragged.  Willington finished the first half with a flourish:  A Brown shot well blocked by Heiniger but the home side fell further behind in added time when Graham scored with a near post header from a corner.

In the second half Willington seemed content to knock the ball around, but they still had time to score another goal, this one in the 87th minute when Matty Moffatt crossed the ball to Brown who found the net to make it 5-0.

There were a few bright spots for Esh.  They improved in the second half – perhaps the cliché combination of them upping their game and Willington’s play lacking the urgency and drive of the first half.

Reece Brown showed some good touches and tried to get some attacks going.  Sam Steele and Glenn Hendrix came on as second half substitutes and tested the Willington defence more than their team mates had done in the opening 45.

But the team’s chances overall were few and far between.  It was more than 70 minutes into the match before they came up with their best efforts:  Daniel Mitchell forcing Willington keeper Craig Hannant into a save diving to his left; then good work by Sean Johnson down the left allowed him to set Steele up.  The Esh No. 14 took a touch and tried to bend the ball round Hannant only to see the ball come back off the post.

At half time the Willington contingent in the crowd said the team had been threatening to produce that kind of performance for a couple of weeks.  Last night they delivered it.