WONDER GOAL NOT ENOUGH FOR WHICKHAM 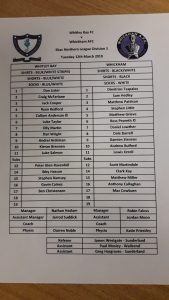 At half-time Whickham found themselves 2-0 down and hadn’t produced much of an attacking threat in a less than mediocre 45 minutes.  Things got even worse in the 47th minute when they went 3-0 down.

Then, from somewhere, they found their fighting spirit in a crazy couple of minutes that featured a leading contender for goal of the season.

Even with a wonder strike, Whickham didn’t deserve to get anything out of the match because Whitley Bay bossed most of the game, even though they kept plugging away.

Winger Luke Salmon fired off the first shot of the match in the 6th minute, bringing the first good save out of Whickham keeper Dimitrios Tsapalos.  Salmon would later inflict more damage.  At the other end, Whickham were able to get the ball into the Whitley Bay box several times, but got bogged down among all the players crowded into the area.

They conceded their first in the 12th minute when Whitley’s Kieran Brannen had a shot come back off a defender.  Salmon followed it up and finished the job to make it 1-0.  By 15 minutes, they’d taken control of the game, looking quicker and sharper than the visitors.  Having seen Whickham on Saturday, it was clear that they were also still suffering from offside-itis, failing to time their forward runs well enough.

Poor defending allowed Whitley to extend their lead in the 42nd minute when the ball was inelegantly bounced over a couple of defenders – most of whom stood still.  That let Olly Martin in and he hit it under Tsapalos.  Things went from bad to worse for Whickham two minutes after the re-start.  Whitley No. 9 Andrei Ardelean sent an excellent ball through to Salmon, he was beaten to the ball by Whickham defender Stephen Little who tried to boot it clear but only managed to hit the ball against Salmon and see it sail into the net.  It’s the kind of misfortune that affects teams towards the bottom of any league.

Tsapalos kept his team hanging on by their finger nails in the 52nd minute when he pulled off another good diving save to stop a Craig McFarlane shot.  And then, between the 57th and 59th minute, we had three goals in three minutes.

The first was a thing of beauty.  Whickham’s Dale Burrell was five yards inside his own area with nothing on, he then caught everyone by surprise, including Whitley keeper Dan Lister, by launching the ball up and over him as he strayed towards the edge of his box.  The shot certainly wasn’t “speculative”.  “Perfectly executed” and “audacious” are closer to the mark.

Having got a toe hold in the game, within seconds they’d conceded a fourth when Whitley Bay went straight up the other end with Dan Wright’s goal re-establishing the home team’s three goal margin.  But Whickham weren’t quite done yet.

Dan Lowther hooked the ball into the Whitley Bay box and Damien Stevens struck it cleanly to make it 4-2.

Whitley Bay should have added to their four-goal haul when on two occasions they had three strikers up against one defender, but they squandered both chances.  In the end, it didn’t matter.