It started out as being a ‘small gesture’ to help lift the spirits of one of their fans – but rapidly escalated and hit the dizzy heights after going global never mind viral on social media platforms. Ashington FC chairman Brian Shotton made a short trip in Wansbeck to spring a surprise on supporter and club volunteer David Bainbridge – presenting him with his own personalised black & white shirt, a training jumper and a Colliers hoody.

The package also included a first in the history of the club as David was awarded a lifelong season ticket. His nephew Ross Thompson – another volunteer at the Woodhorn Lane based outfit as a photographer – captured the moment on video and David’s reaction was heartwarming and priceless, reducing many viewers to tears. Brian Shotton said: “David comes along on a match day with his nephew Ross (Thompson) and sells football and domino cards. It is a fundraiser for the football club and supporters club with the proceeds going to senior and junior teams and also towards other work in the community.

He’s really good at it and perfect for the job. I know Ross quite well and David was clearly feeling a bit down about not getting out as much and missing people at the football club due to the pandemic so I thought it would be nice to take a bit of the football club up to him. At this level of the football pyramid with us attracting 200-250 fans it’s a very inclusive group of people and we try our very best to look after everyone who attends. We have some really good people at the club; it’s a good town and if I hear that someone who has come along, have had a good day and have been made to feel welcome or feel part of the place then I’m happy because that is our aim.” He continued: “The most important thing in all of this is David – the main exercise in this was to make this guy – who was missing something that was important in his life – happy.

The video had me in tears to be honest and the last few days have been overwhelming – but in a good way – for the club. Most importantly though we are delighted David has got the appreciation and love he deserves. We have had so many kind comments, e-mails and donations and have sold Ashington shirts both home and abroad. David is an absolute diamond that I’m proud to say is part of our club.” Ian Reid, chairman of the Ashington FC supporters club said: “I have calculated that over the years, David has generated between £3,500 and £4,000 for the club by selling the football and domino cards – which is phenomenal. He clearly enjoys it along with the banter he receives and he is equally devastated if he can’t attend a match. He is an integral part of the club and has become a lifelong mascot. What the club have done is thoroughly deserved.” Ross Thompson said David and his family have been ‘blown away’ with the attention the story has brought: “Ashington FC is deep in my uncle’s heart,” said Ross, “David loves the club, the players and the fans and being able to help on match days by selling cards and singing from the stand makes him as proud as anything! I cannot explain what this gesture and presentation from the club means to him. It came as a complete surprise – and it’s not the first time the club have made him feel special. A couple of years ago the supporters club gave him a trophy for being the best domino card seller. He was made up about it.

The fans and players have also gone out of their way and he has been made to feel part of the club. It’s unreal. I have shown David as many of the comments as I can and he thanks everyone.” It’s a unique story which has gripped the nation during what are currently difficult times. Comments on social media have come from across the globe including Italy, Brazil and Cologne. Others suggested that Ashington FC be nominated as ‘club of the year’; described the presentation as ‘non league football at its brilliant best’; ‘pure class’ and ‘take a bow it’s a fantastic gesture.’ Ashington-born footballer Mark Cullen – now with Port Vale – tweeted ‘different class from my hometown club – just shows what non league football right down the pyramid does for people’ whilst former Colliers chairman Ian Lavery the MP for Wansbeck remarked: ‘what a great gesture from Ashington FC and the fantastically dedicated chairman Brian Shotton – you’re what our communities all about. So proud of you all.’

Caption: A smile which is worth a thousand words!: pictured is David (forefront) with his personalised football shirt. Looking on is Nicola Shotton, Brian Shotton and Ian Reid. 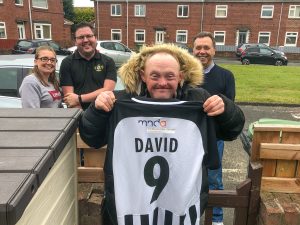