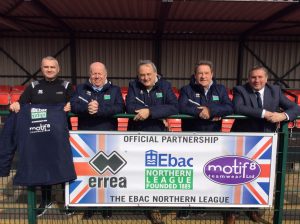 The Ebac Northern League has sealed a four-year, £80,000 sponsorship deal with Motif8 to provide kits for coaching staff.

The Teesside-based company will provide a range of clothes, including Errea coats and shirts, for three members of the coaching staff for each of the next four years, starting in the 2020/21 season.

“We’re delighted to announce this deal with Motif8.

“Finances are always an issue for clubs so this is a welcome and significant investment in the league by the company.

“It was also important that Motif8 is a local company, with the deal helping to support a business in the region.

“We’re proud to link up with the Ebac Northern League which has such a long and rich history.

“We hope it’s the start of a long association with the second oldest football league in the world.”

“We are incredibly proud to be the official bench wear sponsors to all clubs in the Ebac Northern League. Errea are Motif8 teamwear’s flagship brand and we are hoping that the league members are impressed with the package that we have put together for them.

“This deal will allow us to work more closely with clubs in the league and also show the fantastic quality that Errea has to offer.”