A group of colleagues from Ashington Football Club and friends who undertook another gruelling challenge in their bid to raise awareness and funds for Prostate Cancer UK have been overwhelmed by the support and generosity they have received from members of the public. The group successfully completed a 25 miles hike from the Angel of the North in Gateshead back to The dwmedia Stadium at Woodhorn Lane – the home of Ashington FC – and have been left staggered after raising £5,357 for the charity. This was the fourth year in a row that the walk – labelled the ‘March for Men’ – had been arranged and over that time, in excess of £15,000 has been donated. Stevie Baptist, one of the organisers said: “We had a magic day and have been blown away by this amount. The country is in the middle of the Covid-19 pandemic and we had set ourselves a target of £1,000 – but to hit over £5,000 is beyond our wildest dreams and we send out a massive thank you message to all the people who have sponsored us.” He continued: “Originally, the walk was planned for October but we had to defer it as we went into local lockdown. We have increased the distance year on year and every one of us was keen to do it and the great camaraderie kept us going. We battled through a mixed bag of weather but whatever pain we went through is nothing compared to the people who are suffering from what is the biggest cancer amongst men. It all became a bit emotional at times as we met people along the way who gave a donation – including the homeless.” He added: “We’d also like to thank everyone who helped us on the day, to make it happen – Triple J taxis for the transport to the Angel, Jackie from the Clayton for the food and Daniel and Jemma from dw media who met us at various locations along the way with refreshments.” He went on: “We are already looking ahead to 2021. It will be extra special with it being our fifth year and we are thinking about incorporating families and children to get involved.” Tracey Pritchard, Director of Fundraising & Supporter Engagement at Prostate Cancer UK, said: “Walking has been so influential in helping us spread the word about prostate cancer but sadly this disease is not yet out of bounds. Prostate cancer is now the most commonly diagnosed cancer in the UK and due to the impact of Covid-19, our life-saving research is at risk. However, the continued support of so many wonderfully generous and supportive people has enabled us to protect research into better tests and treatments, to stop prostate cancer being a killer. We want to make prostate cancer something that the next generation of men do not fear and will continue to stand side by side with men and their loved ones. We thank Ashington AFC Fans and Friends for going that extra mile.” The participants on the walk were: Michael Slee, Steve Baptist, John Saunders, Lee Clark McCabe, Ian Campbell, Alan Dick, Ian Charlton, Peter Bowman, Cameron Bowman, James Fairgrieve, Craig Dickinson, Mark Dickinson, Neil Dickinson, Matthew Dickinson, Thomas Dickinson, Ralph Dickinson, Graeme Thompson and Nick Dunn. 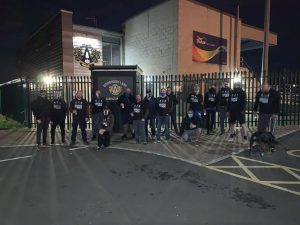