Subject to approval by the FA, it is proposed that the season will end on April 22.

These two separate cups is what happened this season, but in previous seasons there has been a league cup for teams from both divisions.

With Consett FC promoted to the Northern Premier League, Frank Bell is stepping down as the league treasurer, with chairman Glenn Youngman taking over the treasurer’s responsibilities.  Frank will still be helping the league and its clubs as an FA consultant.

Glenn said:  “On behalf of the management committee and the league I’d like to thank Frank for all the work he has done over the years.  Apart from looking after the league’s finances he has also provided invaluable help to our clubs in drawing up business plans and securing funds for their grounds.”

Frank added:  “Promotion for Consett means I will be standing down as treasurer, but I will miss being involved in the day-to-day running of the league and in particular the wonderful people at our clubs.

“I wish everyone all the best and I’m sure the league will continue to thrive.”

The Cleator Cup will take place on Saturday, July 23, with the details of the venue/participants to be confirmed.

Lazarus is alive and well – and living in Ryton and Crawcrook.

Newcastle University must wonder what hit them.  Ahead with a goal in the first minute, they were dealt a crushing blow in the 89th minute, having dominated big chunks of the game.

The dream start came in the shape of Finn Hebron who put Uni ahead when he connected with a ball from the left, hitting a beautifully timed shot that left Ryton keeper Jonathan Ball rooted to the spot.

Long balls up to Uni No. 9 Tolu Osiyemi kept troubling the Ryton defence, while Albion weren’t able to generate any quality attacks.  Meanwhile, Newcastle University looked quicker and sharper.  What attacks did come Uni’s way were well dealt with by captain Stephen Pennington who showed pace and vision to snuff out any threats to goal.

But University weren’t able to build on their lead – James Coates with a shot from an acute angle that flashed across the Ryton goal and then Ball racing out of his box to beat Osiyemi to a through ball and clear the danger.

The only thing going for Ryton was that they had only conceded the one goal.

The first chance of the second half fell to Uni No. 11 Jack Butler who saw his shot blocked by Ball in the 52nd minute and that was followed by two off-target efforts.  It took almost an hour before Ryton started to generate any kind of momentum, with left winger Konnor Lamb the main threat.  He cut in before passing to sub Rees Greenwood who in turn pulled it back to Rhys McLeod, with his shot blocked.

They continued to improve, with more possession without threatening Edward Claxton in the University goal, although they had a penalty appeal turned away in the 70th minute for a tackle by Pennington on Ryton captain Callum Turnbull.  At the other end, No. 10 James Coates had a clear sight of goal but Ball saved the shot with his body.  They just couldn’t find a second goal to give them breathing space.

And that came to haunt them in the last minute of normal time.  Ryton No. 12 Oliver Symons broke down the right and sent over a cross that richocheted off Uni left back Milo Cook and into the net, with Claxton completely wrong-footed.

It was so very tough on University, but reward for Ryton’s determination to keep going to the end.  The nightmare continued into the penalty shoot-out, with University missing the first and third spot kicks and Ball saving the second.

Ryton despatched all of theirs – thanks to Turnbull,  Greenwood and McLeod, and the Ernest Armstrong cup was theirs.

Friday the 13th – lucky for Ryton, unlucky for Newcastle University. 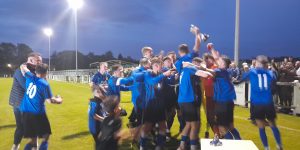 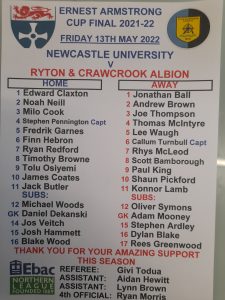 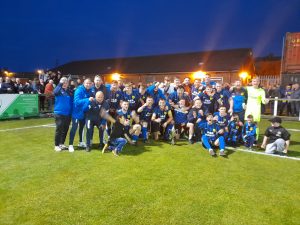 An exhibition of the history of Stanley United, three times Northern League champions, will be staged just 100 yards from the much-loved former hill top ground tomorrow (Saturday, May 14).

It coincides with the launch of former Northern League chairman Mike Amos’s book on the wind-blown village above Crook – and, in particular, the team they nicknamed the Nops.

The book’s called Prairie stories, a nod to the Little House on the Prairie – the affectionate name for United’s unique changing room, tea hut and storm shelter where both players and spectators would desperately seek sanctuary. It’s pictured on the cover.

Founded in 1890, United customarily punched way above their weight. Among players recalled in the book are former Arsenal and Liverpool favourite Geoff Strong, Tommy Cummings who signed for Burnley and won England B honours and former Bishop Auckland star and amateur international Bob Thursby, who swears that the one season at Stanley was the happiest of football life.

Tom and Ernest both attended a United reunion in 1992, the former two hours late after going to the “wrong” Stanley. This one’s a mile-and-a-half above Crook.

“The book’s by no means entirely about the football club, but that’s much the longest chapter” said Mike, who’ll be signing copies. “In general it’s a microcosm of how a former North-East mining community has changed over the years. It would be great to see familiar faces on Saturday.”

The Little House was burned down by arsonists; very little of the ground’s infrastructure remains and the last Stanley United team folded in 2003.

Curated by the Durham Amateur Football Trust, the exhibition at Stanley Crook village hall  features many old photographs of the club plus other memorabilia and runs from 11am-2pm on Saturday. Free light refreshments – including Bovril to warm the cockles – will be served.

Football fans might also want to head a couple of miles west to Tow Law Town, where the final of the Alan Britton Cup – a Crook and District League competition – kicks off between Barnard Castle and Stanhope at 2pm. Still time to be home for the FA Cup final.

*Prairie stories, evocatively illustrated over 170 large pages, costs £12 plus £3 50 postage. Those unable to attend the DAFT exhibition can get details on mikeamos81@aol.com 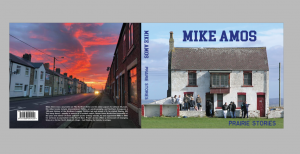 Tonight sees our last game of the season – the final of the Ernest Armstrong Memorial Cup – the cup competition for our Division Two teams.

The match is being held at Birtley’s ground.  Kick off is at 7.30pm, with Newcastle University and Ryton & Crawcrook Albion locking horns.

It’s been a win apiece in the league, with the teams winning the away fixture.  In August Ryton beat Uni 4-1, while in February Newcastle University beat Ryton 4-2.  Both teams have been getting some last minute training in over the last two nights.

Ryton manager Daniel Iredale said:  “The team is shaping up very well for the match.  We have had a major re-build at the club, with a big revolving door of players and we have done ourselves proud, but it was very frustrating to miss out on the last day of the season after being in the play-off places during the season.

“But to finish with a cup will be a fantastic achievement.  Missing out on the playoffs has made us more eager to do well and win the final.”  And he’s already looking forward to next season.

“We have a very solid foundation to build on and our aim is automatic promotion.  We have most of the squad we need and want committed to us for next season.”

Daniel said:  “The two league games were totally opposite.  We won at their place but it was a different story when they came to us and beat us.”

His counterpart Neil Baistow said they had an unusually long time to prepare for the match.  The University also plays in the BUCS league, meaning they’re regularly playing several times a week.

“It’s been nice to have a bit more time to prepare for the game.  We’ve had a few weeks to build up for the match, which doesn’t normally happen for us.  Apart from a couple of players missing with long-term injuries, we’ve got a clean bill of health.

“There’s not much difference between the two teams.  The first league match was early in the season and the second was affected by strong winds and we managed the conditions better than they did.

“We slipped away in the league in the last couple of weeks and finished lower than what we should have done but winning a cup will be a great way to end the season.”

Due to limited parking, volunteers will act as parking attendants and will advise people where to park when they arrive.
An additional car park opposite the ground will be available along with another car park further along the main road.
No parking will be allowed by the ground entrance as entrances to two nearby businesses must be kept clear and we would appreciate everyone’s cooperation and patience. 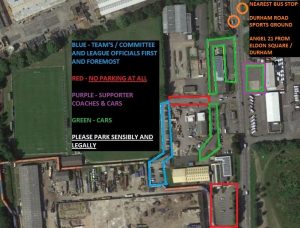 The FA has released the list of teams allocated to Step 5 and 6 for the National League System – our first and second divisions.

Pickering Town FC in North Yorkshire will join Division One, with Billingham Town relegated to Division Two.  (Pickering play at the Recreation Club ground.) Penrith has been given a reprieve from relegation.

The promotion of Carlisle City and Heaton Stannington to Division One has been confirmed.

Durham City has been relegated out of the league and the FA has increased the number of clubs in Division Two – which will now run with 22 teams (compared to 21 this season).

(With North Shields and Consett promoted out of the league, the first division will remain at 20 teams.)

These decisions are subject to appeal to the FA.

“We’re delighted to welcome new teams to the league.  I’m sure they will be made to feel very welcome as they travel to new grounds in the region.

“The close season will give everyone a much-needed break, allowing them to come back raring to go in July.

“It’s been great to have finished a full season for the first time in three years and I would like to thank everyone involved in our league for all their hard work over the last season.”

Crook Town AFC would like to invite applications for the vacant team manager’s post.
Applications in confidence to the club secretary at crooktownafc2015@yahoo.co.uk before Wednesday 18th May 2022.