Two of our best teams – both with a rich recent pedigree in the Vase: Hebburn in last season’s yet-to-be-played final and the Robins Wembley victors five years ago.  A despite heavy, muddy conditions, they didn’t disappoint.

It wasn’t a pitch for swift, elegant, passing moves, but one for strength-sapping hard graft.  The ground staff had performed a minor miracle to get the game on at all at the second time of asking.

And it was Shields who were first out of the traps with a brisk, positive start.  Kyle Patton getting on the end of an Andrew Cartwright cross and then Dan Wilson not able to get enough contact on the ball to trouble Hebburn keeper Mark Foden.  The home team were pegged back and unable to keep the ball for more than for a couple of passes.

Their first chance came when Shields left back Chris McDonald hit a back pass short.  Hebburn No. 9 Graeme Armstrong got close to intercepting it, but Shields keeper Greg Purvis just beat him to it.  Against the run of play, it was Hebburn who took the lead, with Louis Storey getting on the end of a long, looping free kick close to the halfway line, with the captain with a looping header over Purvis and into the net.

Shields almost presented them with a second when a defender mis-kicked the ball – fortunately for them, hitting it straight at Purvis, with Thomas Potter putting the rebound wide.  The momentum shifted Hebburn’s way, with Anth Myers and McDonald putting in last man tackles to stop Armstrong and Potter.  For almost 10 minutes the game got bogged down in a midfield tussle, but with seven minutes before the break, Shields were level.

The ball was played up to Wilson who knocked it across to Ryan Carr who hit a quality finish – a first time volley with pace and precision; the goal was all the better considering the conditions.  At the other end, in the 43rd minute, Cedwyn Scott had a shot saved by Purvis diving down to his right.  At the half: 1-1 and that was just about right.

Within minutes of the re-start, Hebburn took the game by the scruff of the neck.  In the 48th minute, keeper Foden hit a long, long goal kick that found Michael Richardson who took the ball across Shields No. 6 Tom Bexton who slipped, allowing Richardson a clear run and shot at goal, witht the No. 10 finishing with aplomb.

They made it 3-1 seven minutes later.  Shields were unable to clear the ball as it bobbled in and around their penalty area.  Eventually the ball landed at Scott’s feet and his driving ball back in the mixer was met by Armstrong who managed to hit it home.

Despite being two goals down, Shields kept plugging away.  Dave Robinson put a header just over the bar in the 59th minute; in the 71st minute they had appeals for a penalty waved away.  They kept the pressure up, only to see attacks break down as they got to the Hebburn box.

Their efforts were rewarded in the 81st minute when a cross by  Cam Cunningham was met by Callum Smith running in at the far post.  3-2 and it was going to be a nervy finish to the game for Hebburn.

The Robins kept driving forward, with Hebburn content to defend deep and in numbers, happy to boot the ball clear unceremoniously on a couple of occasions, but despite all their effort and perseverance, Shields couldn’t find an equaliser.

PS – thanks to Gav Perry for the match photos.

PPS – there was drama at Jarrow – with the home team finding an equaliser in the 94th minute only to lose the penalty shoot-out.  There were wins for Ryhope CW and Shildon in the other ties, to be played next Saturday (also the date for Seaham’s re-arranged second round tie). 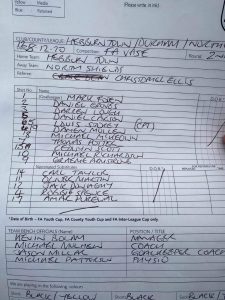 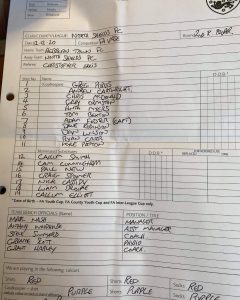 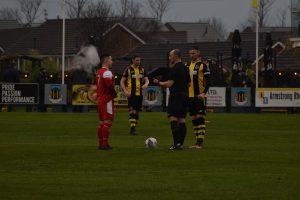 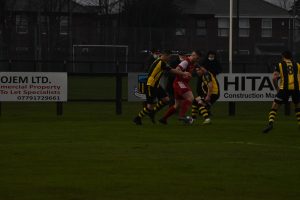