A NIGHT FOR THE TABLE TOPPERS

Heaton Stannington solidified top spot in Division Two as they defeated Blyth Town 1-0 at Gateway Park.  The visitors scored the only goal of the game in the 11th minute, as Leighton Hopper drove down the left before his lofted cross was met by Dean Holmes who slotted home beyond Blyth keeper Callum Corkhill.

Heaton almost doubled their lead just eight minutes later – Hopper’s curling effort from 25 yards out was brilliantly tipped around the post by Corkhill.

Blyth struggled to create many chances in the first half, however they almost equalised just four minutes into the second half.  A long ball forward into the penalty area was headed into the path of Blyth forward Callum Johnston who could only fire wide of the post from six yards out.

The hosts kept pushing and came agonisingly close to pulling level – Brandon Slater ran onto a through ball before cutting inside and firing his low effort off the post, with the Stan holding on for all three points.

Meanwhile, down the coast, Easington Colliery continued their unbeaten run with a 2-1 win over fellow promotion challengers Ryton & Crawcrook Albion.

Two clinical finishes were enough to seal the win.

In the 9th minute, left winger Liam Adamson latched on to a pass before coolly sliding the ball into the far corner of the net.  The goal helped settle Easington into their game, while Ryton’s moves were breaking down at the edge of the Easington penalty area.

Both teams were playing at a high tempo and looking to get the ball forward as quickly as possible.

The flow of the first half was interrupted firstly by an injury to Adamson and secondly by a disturbance in the crowd just before half time.   When play was resumed, Easington captain Jack Pounder put the home side 2-0 up by rounding Ryton keeper Daniel Gladstone and slotting the ball home.

Three minutes into the second half Easington sub Cameron Fenton had a shot bounce off the top of the bar, but the game then developed into a midfield tussle, with most of the play between the two penalty areas, and the respective defences on top.

With seven minutes to go, Ryton pulled themselves back into the game when No. 11 Joe Thompson turned the defence before striking it high and across home keeper Joe Atkinson.  Despite pressing in the closing stages, they couldn’t find an equaliser.

The night’s results sent Heaton Stannington nine points clear, while Easington Colliery haven’t dropped a league point since early September and have three games in hand on the Stan. 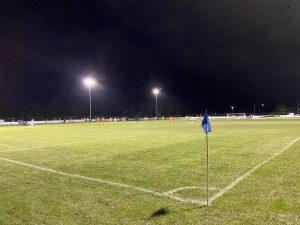 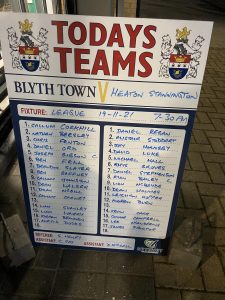 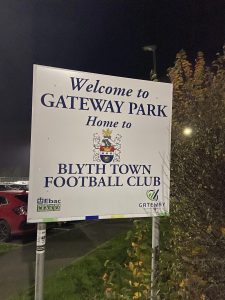 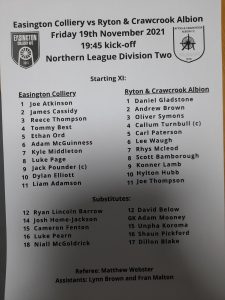