A NIGHT TO REMEMBER AND FORGET

Newton Aycliffe simply steamrollered over Whitley Bay.  And the star of the first half show was Ben Dibb-Fuller.

Goal one:  Assist Dibb-Fuller as the No. 11 puts a through ball to Ethan Ward who drills into the left hand corner and out of the blue Aycliffe had taken the lead in the 9th minute (with a Whitley Bay defender astutely and pertinently asking the coaching staff:  “Where did that come from?”)

Goal two:  Assist Dibb-Fuller as he sends another through ball, this time to Andrei-Vasile Ardelean scoring from a tight angle.  Goal three: Assist Dibb-Fuller – hitting a free kick that Whitley keeper Daniel Lister could only parry, with Liam Jarvie the first to the loose ball to hit it into the net.

Goal four:  Assist Dibb-Fuller, winning a penalty converted by Jake Petitjean after he was brought down in the area.  Goal five:  Nowt to do with him.  Liam Jarvie driving into the box, with his cross knocked into his own goal by Bay defender Luke Taylor.

Aycliffe were brisk and busy for the whole of the first half.  Whitley Bay were limited to a couple of chances, while their defence looked all at sea.

For more than 20 minutes of the second half it looked as though the Whitley Bay defence had steadied the ship, although at the other end, they didn’t look likely to score, with the Aycliffe defence in no serious danger of being breached.

Dibb-Fuller finally managed to grab a goal for himself in the 70th minute, blocking an attempted clearance before taking the ball round Lister and slotting it past a defender who tried to stop it crossing the line.

It wasn’t until the 82nd minute before Whitley Bay produced their best shot – by sub Lewis Orrell who forced a diving save by keeper Adam Pickford high to his left.

There were two late nails in the Whitley Bay coffin:  A disastrous ball across the goal mouth by a defender presented the ball to Alexander Walker who made it 7-0 in the 88th minute and then on the stroke of 90 minutes, Craig McFarlane brought down his opposite number Petitjean in the area, with the No. 7 wrapping up the scoring with the penalty.

It was McFarlane’s 400th appearance for Whitley Bay – an impressive milestone – but one he’ll not remember with any great fondess. 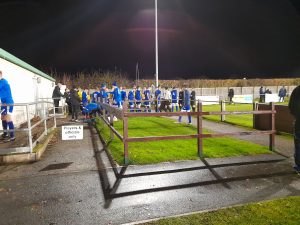 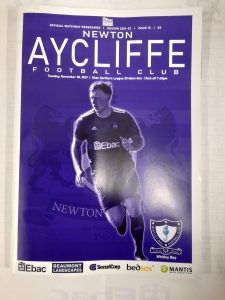 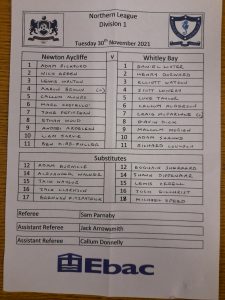 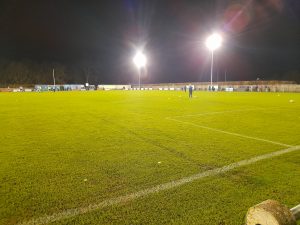