For the first time this season Jarrow managed to secure a win on a Saturday.  It came with a solid, workman-like performance at the Ford Hub which stretches their unbeaten run in the league to five games.  For their part the hosts played neat football, had their chances, but lacked a bit of a cutting edge on the day.

For the opening 20 minute both teams came close to scoring.  Jarrow No. 4 Alex Berham hit a half-volley that sailed just over the bar; United No. 10 Sam Johnson worked the ball across the Jarrow area before hitting a shot that came off the bar and then Jarrow No. 8 Evan Whittle had a shot charged down.

The breakthrough for Jarrow came soon after – Whittle and Salim Abubaker combining before Whittle’s shot was deflected into the net.  The goal was just one contribution by the No. 8 who was the best player on the pitch.  He had a hand in the second, passing the ball out to overlapping fullback Nick Little who sent over a cross that was met by Liam Mulvain who guided it past the United keeper.

It was a simple but effective move and goal.

Chester-le-Street United first half game plan was to get it out to the wingers as often as possible but a series of crosses failed to find team mates in the box.  They found the Jarrow defence a tough nut to crack.

They started the second half in much more dangerous fashion – captain Taylor Campbell found himself in space in the Jarrow area, poked the ball goalwards, with Jarrow keeper Graeme Pickering able to get his fingertips  to it and put it out for a corner.  Three minutes later he came closer still – hitting a free kick that rattled off the Jarrow bar.

After that the game developed into a midfield stalemate.

With just under 15 minutes left Jarrow put the game beyond United’s reach.  Dan Smith was tripped in the box as he shaped up to shoot.  Abubaker tucked the spot kick in to make it 0-3.

United had one more chance to score in the 83rd minute with one of their best moves of the game involving three of their subs.  Brandon Young knocked the ball out to Daniel Robinson whose cross was met by Matthew O’Brien who made a late run into the area but he planted his header over the bar.

(The Jarrow “choir” – I use the term advisedly – were in good voice throughout.) 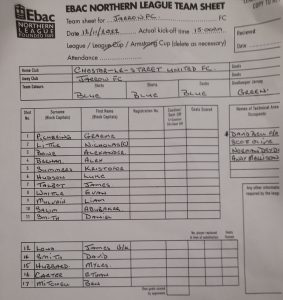 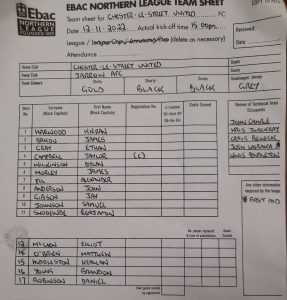