If not quite dead and buried, things weren’t looking too clever for Jarrow at the end of the first half.

For the first 10 minutes they didn’t get much of a touch as the young Gateshead side moved the ball around the pitch with ease.  After six minutes they were a goal down and just after the half-hour mark they conceded their second, with Eddie Thomas and Sam Carson inflicting the damage.  And to add to their woes, Jarrow spurned some good chances to score, with No. 9 Adam Lennox the mail culprit.

In the 13th minute he hit a shot over the bar despite having plenty of time and space to choose his spot.  In the 26th minute he pulled another shot wide.  His striking partner Channon North came closer to scoring – having a shot well covered by Adam Cameron in the Gateshead goal and then hitting the post with a shot in the 39th minute.

The half closed with Jarrow keeper Steven Hubery tipping a Danny Anderson shot over the bar.

Jarrow then pulled of the most remarkable comeback and turnround I have ever seen (and I include Newcastle coming back from 4-0 down against Arsenal to earn a draw against the Gooners almost a decade ago).

And leading the charge?  Adam Lennox – the man at the centre of the Lazarus-like recovery.  And the recovery only took four minutes to get going.

In the 49th minute, Jarrow No. 7 David Smith knocked the ball across to him.  Lennox moved the ball to his left foot and hit a precise shot between the keeper and the bottom left corner.  A mere 36 seconds later, he put his team level, this time working with North to grab the equaliser.  All of a sudden it was 2-2.

Jarrow continued to apply the pressure, with Gateshead right back Ryan Bolton clearing the ball away, close to his own line.  Jarrow were a team transformed.  Unbelievably they were ahead in the 57th minute when captain Jordon Mellish rose above everyone else to head a Lee Kerr corner into the net.  3-2.

In the 65th minute Lennox knocked another shot wide left but he made amends by winning a penalty.  A North pass allowed him to run past the Gateshead defence and he was denied a golden shooting chance by Gateshead defender Elliot Jackson who fouled the No. 9, with Kris Allen despatching the spot kick.  With under 70 minutes gone it was 4-2.

From then on in, the ‘Heed defence collapsed.

74′ – Allen bisects the defence, setting Lennox on his way and the No. 9 slots it past the advancing keeper, finding the inside of the right hand post.  5-2 and Lennox’s hat-trick.

80′ – This time Lennox turns provider, beating the Gateshead left back and getting the ball to Gary Shaw who hits a curling shot into the top right hand corner of the visitors’ goal. 6-2.

88′ – Liam Murray wraps up the scoring  after running across the defence before hitting another precise shot just inside the right hand post. 7-2.

PS – Finally, a public information warning:  If you want boring football, whatever you do, don’t go to Jarrow.  The last four games I’ve been to there have been great. 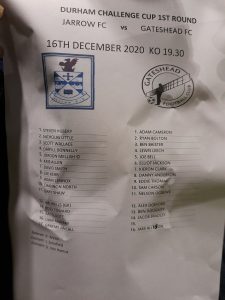 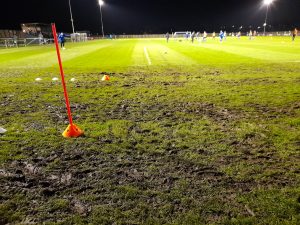