AYCLIFFE COAST PAST THE LAWYERS

In blistering heat, Newton Aycliffe sauntered past newly-promoted Tow Law with an impressive performance that started from the off.  But despite their early pressure they weren’t able to get beyond the 18-yard line.  They should have taken the lead in the 15th minute when Joe Ferguson’s shot was palmed away by Tow Law keeper Andrew Coulson, spilling to Oscar Taylor who planted his shot wide.

It didn’t take long for him to make amends.  A mis-placed clearance by Lawyers defender Daniel Harvey went straight to Ethan Wood.  His pass to Marc Costello was guided on by the midfielder to Taylor who had a simple tap-in.

Aycliffe never looked back and bagged another three before the break:  Wood chipped the ball in to Jamie Owens who put an uncontested header past the keeper; a long free kick from the left found full back Callum Munro at the far post, with the No. 2 powering a header into the net.  Quick passing by Aycliffe on the edge of the box set Owens up and the No. 10 placed the ball perfectly between the left hand post and the keeper to bag his second.

Just about all of the play was in Tow Law’s half, with the Lawyers not helping their cause by failing to hold on to the ball; their passing moves lasted only two or three passes at the most.

In the closing minutes of the half Tow Law had two opportunities to claw a couple of goals back.  Joel Pearson floated a free kick into the Aycliffe box where Harvey hit a first time shot that was tipped over the bar by Aycliffe keeper Adam McHugh who then had to produce a diving save to stop a Pearson shot in time added on.

I suspect words were exchanged in the Tow Law changing rooms at half-time.  They came out with more energy and purpose and were rewarded after only three minutes.  Luke Bailey turned and chipped the ball into the area, a defender tried to clear it but it came off sub Nick Marley and rebounded into the net.  Three minutes later Pearson had another shot blocked by the defence.  The introduction of Marley gave them a more physical presence up front.

But just as the Lawyers were making more of a contest of it, they suffered another setback from which they never recovered.  Wood tried a long-range effort that left a probably unsighted Coulson standing still as the ball flashed past him and into the net.

It also signalled a change of pace by Aycliffe who didn’t play with the same urgency.  With the heat and the game won that was hardly a surprise.

With less than a quarter of an hour to go Aycliffe wrapped up the scoring with a long kick by McHugh over the Tow Law defence, releasing sub Liam Jarvie for a run at goal and the No. 12 was able to lob it past Coulson.

The win sees Aycliffe in third in the table, but it was a long, hard, tiring day for the Lawyers after the highs of their midweek FA Cup replay triumph.

There were water breaks and substitutions aplenty.  In the heat, no-one was complaining. 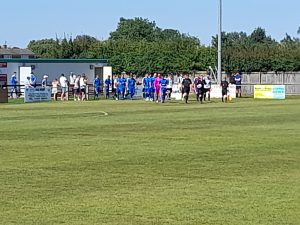 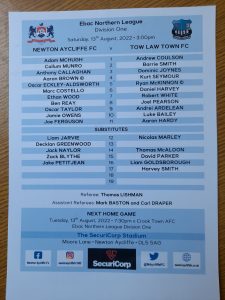