AYCLIFFE NOT QUITE STRONG ENOUGH TO PROGRESS

Aycliffe were up against a strong, physical team from the next league up.  They lost the physical battle and it cost them the tie – along with two exceptional saves by the Mossley keeper.

The defeat came despite by hard work by Aycliffe – with Adam Burnicle in particular putting in a shift and a half up front, at times up against a couple of their defenders.

With only five minutes on the clock Aycliffe were within a whisker of getting off to the perfect start.  Liam Jarvie picked up a loose ball just outside the Mossley box and bent a shot round a defender, forcing keeper Dale Latham to dive at full stretch to push it out for a corner.

At times they looked uncomfortable against a team who had several big players in their number and their biggest problem was not looking after the ball as well as they should have, although Mossley only had two shots in the opening 20 minutes, one by No. 10 Mason Fawns hit straight at Aycliffe keeper Adam Pickford and the other, by No. 9 Harry Pratt, pulled wide.  Pratt proved a handful all game long.

Aycliffe fell behind in the 25th minute when a loose ball by a defender allowed Pratt to intercept the pass and push it forward to Jordan Butterworth who placed it past Pickford.  The goal came after Mossley had taken a firm grip of the game.  The first half saw a series of fouls which didn’t help the flow of the game.

Aycliffe’s best spells came when they got their passing game going, foregoing long, high balls that were meat and drink to the Mossley back line.  In the 37th minute Ben Dibb-Fuller sent over a cross that Mossley defender Kain Dean booted clear, close to his own line.  With five minutes left in the half, Burnicle had a shot from a tight angle that went wide right.

Latham pulled off the second of his excellent saves in the 56th minute, tipping a long-range, powerful shot by Shaun Ryder over the bar.

The second half was a much more even contest, although Aycliffe couldn’t get past the Mossley defence.  At the other end, defender Alex Walker made a crucial tackle in the 66th minute, with David Kuba-Kuba bearing down on goal.

Ryder had another shot in the 72nd minute that was taken low down to his left by Latham and although Mossley had several other promising attacks in the half, Pickford wasn’t called on to make any tough saves.

There was a sour end to the game, with a mass confrontation in front of the Aycliffe bench that saw Aycliffe sub Sonni Coleman dismissed in the fifth minute of added time.

After the game I struggled to come up with a word to sum up the match.  They best I could come up with is:  “intense”.  By no means a classic and perhaps short of dramatic incidents.  Overall, Mossley deserved to progress, but it took those two saves by Latham to see them through. 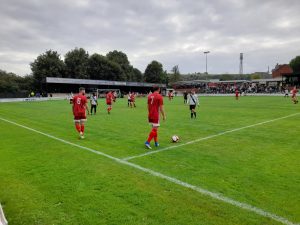 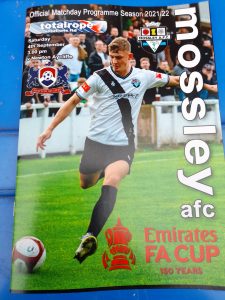 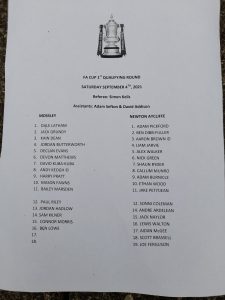 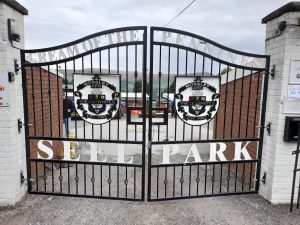