AYCLIFFE ON A ROLL 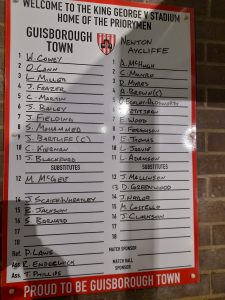 Newton Aycliffe are on a bit of a roll – five wins on the bounce in the league which consolidates their second place in the division.

And the three points were bagged following a good start and a strong finish.  They were a goal up after only two minutes, with the sharp start paying dividends – Eddie Thomas finishing off a three man move involving Callum Munro and Liam Adamson.

Guisborough weren’t slow off the mark either – Jack Blackford and Cole Kiernan combining, with a timely tackle by Oscar Eckley-Aldsworthy snuffing out the danger.  The sides traded attacks.

Aycliffe defender Aaron Brown blocked a shot by Joe Bartliff and Guisborough keeper Will Cowey stopping shots by Liam Jarvie in the 8th and 10th minute.  It was a blistering start by the teams who were playing at full throttle.  After that, the game settled down into a more measured pace, with neither team able to gain the upper hand.

For 20 minutes the only opening came when Aycliffe No. 8 Joe Ferguson forced his way through a crowded box but he could only hit the ball wide of the post.

The pace picked up again in the closing 15 minutes of the half.  Ferguson hit another shot that was blocked by Cowey who followed that up with a diving save after a touch, turn and shot by Jarvie.  The half closed with Thomas getting within inches of a Dan Myres cross close to the Guisborough goal.

At the start of the second half, Guisborough mirrored Aycliffe’s good start to the first half – levelling the game up in the 2nd minute with Shaaban Mohammed lofting a free kick into the Aycliffe area and Bartliff getting the slightest of slight touches to guide the ball into the net.

For the next 20 minutes the game lacked the zip and quality of the first half but that all changed in the 73rd minute when Guisborough sub Mikey McGee latched on to a long ball, battled with Brown before getting goalside and planting the ball past McHugh.

Their lead only lasted four minutes.  Aycliffe levelled it up when the ball came to Ferguson after an initial shot by Adamson, with the No. 8 able to squeeze it between keeper and post.  The visitors pressed forward in search of a winner.

With 10 minutes to go, Cowey tipped a long-range shot by Ethan Wood over the bar.  From the corner, the ball ended up in the net, but the goal was chalked off for offside, but they found the winner in the 87th minute.  Cowey couldn’t hold on to a Wood shot.  Jarvie picked up the loose ball and fired it in to seal the win. 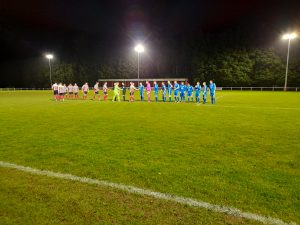 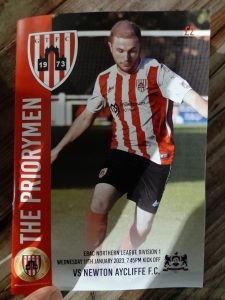