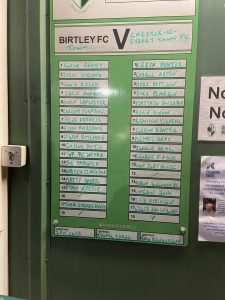 Neither side offered much in the opening 20 minutes of the match, with both teams struggling to keep a hold of the ball. The visitors went closest – George Pinder’s cross was met by Brandon Turnbull who fired just wide.

Birtley took the lead in the 25th minute after good work from top scorer Aidan Rutledge. The striker did well to hold off the challenge of two Chester-le-Street players before slipping the ball through Glen Hargrove who fired home into the bottom corner.

Rutledge came close to adding Birtley’s second – Hargraves’ whipped cross was met by the striker who saw his first time volley fly just over the bar.

There wasn’t much to separate the two sides in the second half. Chester-le-Street committed bodies forward in a bid to get back in the game but were unable to find the final pass.

Birtley doubled their lead 56 minutes in – an in-swinging corner from the left evaded everyone before being tapped home at the back post by Rutledge.

The visitors struggled to create any real chances until the 86th minute – a long ball over the top sent Michael Gray through on goal, however he sent his chipped effort over Conor Grant and just past the post.

Birtley Town held on for all three points and travel to Washington in their next game, whilst the Cestrians travel to Esh Winning.