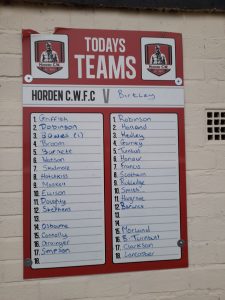 It promised to be one of the Division Two matches of the season so far.  Both teams have got off to a strong start, sitting in second and third in the table.

But it was Birtley who rose to the occasion, deservedly winning and going top of the division (albeit having played two more games than Billingham Town).

They dug deep when they needed to and striker Aidan Rutledge provided the cutting edge, bagging a (somewhat generous) hat-trick.  Horden will have better days.  Much better days.

The game got off to a frantic start, plenty of running around and quick passing but not a lot of composure on the ball.  After more than 10 minutes, one of the coaching staff shouted:  “Look after it [the ball]”.  Fat chance.  It took around 20 minutes for a bit of order to break out and it was the visitors who started to impose themselves on the match and were rewarded with a 23rd minute goal.

Full back Joshua Holland (who pushed forward down the left to good effect), nudged the ball over to the far post.  A Horden player kept it alive by knocking it across the goalmouth where Rutledge was on hand to help it over the line from a couple of inches out.

For their part, Horden couldn’t get their foot on the ball to take the momentum away from Birtley, rushing their play.  With Ollie Hotchkiss playing in the middle of a back three, the home team didn’t have his time, control and passing in midfield to exert his usual influence on the game.

Birtley could have doubled their advantage a couple of minutes before the break.  Rutledge hit a well-weighted pass to Callum Smith only for the No. 10 to hit a weak shot.

Horden tried to take the game to Birtley after the re-start.  A quick, first-time ball from the half-way line by Nat Skidmore to David Doughty was a yard too strong, allowing Birtley keeper Isaac Robinson to race out and clear.  Robinson then needed treatment after jumping up for a ball with Horden No. 9 Jack Maskell just outside his area, coming off second best and groggy, with Maskell booked for the challenge.

But then the game started to slip away from the Marras.  They had Josh Barnett to thank for keeping it at 0-1, sliding in to tackle Glen Hargrave as he tried to shoot to finish off a move involving Jack Honour and Rutledge.  They were reduced to 10 men when Barney Dobinson was sent off in the 61st minute and five minutes later it was 0-2.  After dispossessing Hotchkiss, Rutledge tried to thread the ball between keeper Pual Griffith and Barnett.  Griffith got to the ball only to hit it against Barnett who watched as the ball rebounded off him and into the net.  Officially the scorer was given as Rutledge.  I’m sure neither side was going to complain.

Barnett was at the centre of the action in the 73rd minute, producing another sliding tackle to block a Joe Barwick shot but Birtley extended their lead and there was no doubt who scored it:  Alex Francis lofted a corner to Rutledge who, with his back to goal, managed to send a looping header over a crowded six yard area and into the net to seal his hat-trick.

A couple of minutes later Barnett was on hand again to tackle Rutledge and clear the ball after the striker took too long on the ball.  As the game went into added time, Griffith produced a strong save, diving to stop a first time shot by Barwick and then Rutledge dragged a shot across the Horden goal..

The last action of the match saw a shot by Horden sub Chris Stevens from an acute angle on the right that Robinson palmed away for a corner. 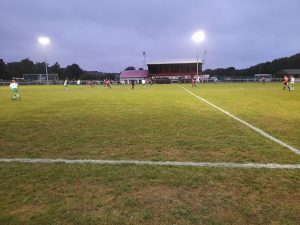 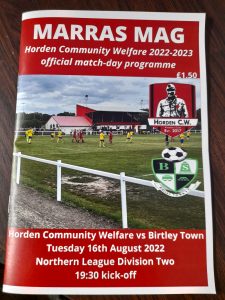