Billingham Town came within a whisker of grabbing a valuable point, but, despite some late game jitters, it was Red Star who ended up with the win.

From the off Red Star controlled the game, with captain Tom Bott laying on a bit of a masterclass in long range, pinpoint passes to launch attacks only for Tom Lawson and Joe Kerridge to miss the target with their shots.

Despite being on the back foot, it was Billingham Town who opened the scoring, Ryan Gooch driving through the heart of the Red Star defence before knocking it across to Connor Dunleavy who placed the ball across keeper Andrew Jennison and in to make it a somewhat unlikely 1-0 lead.

It only last two minutes; Red Star were back level with an attack once again instigated from the back by Bott, with Lawson getting past a defender on the by-line before pulling the ball back to No. 9 Adam Lennox.  Town keeper Jack Norton managed to get a hand to the ball but couldn’t keep it out.

For the rest of the half it became a midfield tussle with both teams getting the measure of each other defensively.

Red Star created the first opening of the first half in the 49th minute – Dan Sayer pulling to ball back on to his left foot, with his shot scraping narrowly past the wrong side of the post.  And then in the 55th minute the game seemed to turn Red Star’s way, with Andrew Wilson sent off after bringing down Lennox on the edge of the box.  The Town wall held firm to block the free kick.

Down to 10 men for the last 35 minutes, Billy Town’s approach was simple – get everyone behind the ball to set up a blue wall and boot it out as quickly as possible.  Red Star attacked left, right and centre but couldn’t find a goal.  The closest they came was when Max Nelson turned and shot with the ball tipped over the bar by Norton.  With just over 10 minutes to go Lennox was within a foot or two of a Bott cross from the left and then Mark Robinson had a shot saved by Norton who was able to get a hand to the ball despite going the wrong way.

Seaham finally breached the blue wall in the 81st minute.  A free kick went across the Billingham Town area.  The ball fell to Lennox who picked his spot and scored both his and his team’s second.

With nothing to lose, Billingham Town made it a nervy finale – dismantling the defensive wall and pushing forward to try and find an equaliser.  Their chance came in the 90th minute, but substitute Jude Harrison squandered a great chance to score by putting the ball wide with the goal beckoning.

Lennox almost grabbed a hat trick with the last kick of the game, hitting a thundering shot that hit the post and came back out. 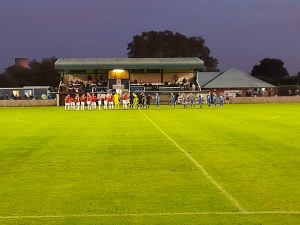 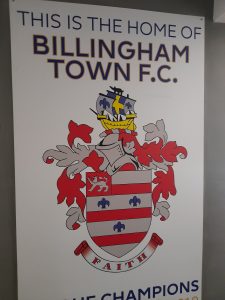 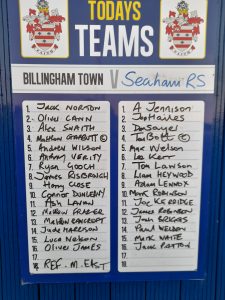