It wasn’t the most entertaining game for the neutral with neither side at their best, however it was Blyth who got the job done to seal all three points which moves them up to fourth.

Blyth got off to a flying start just three minutes in – Louis Calvert was played through down the left, before his attempted cross flew straight over the head of West End keeper Neal Bussey into the back of the net.

Up until five minutes before the break, there wasn’t much to see. West End had the majority of possession but were unable to create any clear-cut chances – the closest they came was a long-range effort by Dylan Archer which was comfortably saved.

Blyth doubled their tally just two minutes before half time. Brandon Slater brilliantly drove down the right, beating his man, before his low cross across the face of goal was tapped home by Kevin Westphal.

The hosts came out for the second half and looked more like the team that were in sixth place before the game. West End held their own over the course of the half however Blyth’s quality shone through.

Blyth extended their advantage on the hour mark – Slater’s deft cross was met by Calvert who glanced home beyond Bussey to put the game beyond doubt.

Calvert almost completed his hat trick just five minutes later as he ran onto a long ball forward, however his half volley looped just wide of the post.

With Blyth in control, the tempo of the game slowed down with neither able to force any openings. With just five minutes remaining of the match, West End were awarded a penalty.

Oliver Thompson was brought down in the area, before Brad Oliver stepped and dispatched the penalty into the top corner.

Blyth restored their three goal lead just two minutes later – Matthew Nelson picked up a loose ball before driving through on goal and lobbing the onrushing Bussey to seal his sides victory. 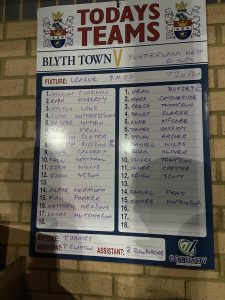 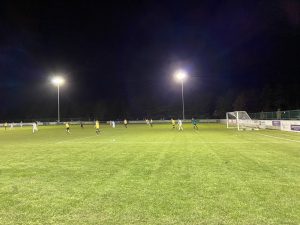