CARLISLE CRUISE TO WIN AT THE BAY

The visitors got off to a flying start within 10 minutes – Dan Kirkup lost his man from a corner before volleying home beyond Dan Lister.

Carlisle doubled their lead in the 20th minute through Thomas Malone. Kirkup’s header from a corner was met by Malone who tapped home from close range.

Whitley Bay struggled to get into the game and made things harder for themselves when Adam Hutchinson brought down Callum Birdsall in the area to gift Carlisle a penalty.  Jordan Palmer stepped up but saw his weak effort comfortable saved by Lister.

Carlisle found themselves three goals to the good just before half time. Malone picked up the ball 30 yards out before unleashing a thunderous strike which sailed past Lister.

Things went from bad to worse for Whitley Bay in the second half. Jordan Holt and Birdsall added two more for Carlisle with clever finishes to put the game out of reach for the home side.

The Bay pulled a goal back with 20 minutes remaining – Elliott Day pulled the ball back for Luke Porritt to tap home for a consolation goal.

Carlisle saw out their emphatic victory over a Whitley Bay side who were well below par. Whitley Bay visit Penrith in their next game in a bid to get back to winning ways, whilst Carlisle City visit Sunderland RCA. 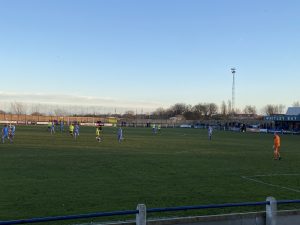