Cup ties aren’t meant to be easy.  And that’s something that Birtley can attest to.  It was a nerve jangling, nail biting Vase tie.  Only one thing separated the two teams – a cutting edge – and it came in the shape of Birtley No. 9 Joe Barwick.

The final whistle brought relief as much as joy as the Ebac Northern League team reached the second round of the Buildbase FA Vase for the very first time.

A bumpy pitch didn’t help either side as they both struggled to get any flowing football going in the first half.  They both made their best headway down their respective right hand sides and it was more than 15 minutes into the game before they created their best openings.

Barwick skipped round a diving tackle by Swallownest No. 6 Jake Hatton and then cut back inside right back Jack Henry but the Birtley striker couldn’t keep his shot down and on target, while Swallownest No. 10 Alex Lill put his effort over the bar.

Halfway through the half, Birtley got their noses ahead.  Kaleb Young (who provided a valuable supporting role to Barwick throughout the game) tried to cross the ball for his team mate only for it to be stopped by a defender.  He got a second chance when it rebounded straight back to him and his second cross was nodded in by the No. 9 at the far post.  Ten minutes later, a highly speculative high ball towards the Swallownest goal by Young almost caught keeper Zac Walker off guard, but he was able to gather it before it went in at the top right corner.

The home team created more attacks but couldn’t find the right ball to put the Birtley goal under real threat, until two minutes before the break when a header by Swallownest No. 5 Lewis Twibell bounced back off the post.

They were two, evenly-matched teams.

The quality of the football improved in the second half.  Birtley in particular picked up the pace and passing.  Young just overhit a pass to Barwick who had space in front of him to go for goal; Barwick then tried a volley on the turn close to the right hand post, but the keeper was right behind it.  That was followed by shots by Young and Alex Morland.

Despite all of this, one goal never seemed to be enough and the visitors were given valuable breathing space in the 61st minute.  Taking another Young pass, Barwick’s shot came back off the post; he was quickest to the rebound to make it 2-0.  A minute later, he almost bagged a hat-trick when his volley was tipped on to the bar and out for a corner by Walker with a quick, instinctive save.

Swallownest came close to pulling a goal back, only to be thwarted by a tremendous double save by Birtley keeper Isaak Robinson – stopping shots by Callum Riley and Lill, with a third shot cleared by Christian Campos-Loughlin.  Swallownest continued to press the visitors on to the back foot and No. 9 Jason Short hit a well-struck volley over the bar.  They made their pressure tell with just over 10 minutes to go.  Jake Squires hit a powerful ball across the Birtley penalty area and sub Alex Nightingale was able to bundle it in – to make it a nervy finish for Birtley.

They sealed the win in the 86th minute thanks to two subs.  Joe Hunter produced a great cross from the left that was met by Chris Stevens running in at the far post.   His shot was brilliantly saved by Walker but the No. 17 buried the rebound with a header past the helpless keeper.

The relief was palpable.

(PS – a particular thanks to Swallownest’s Margaret Gregory – one of those invaluable volunteers who are the lifeblood of non-league football.  And a big shout out for all the Birtley fans who made their way to the game.) 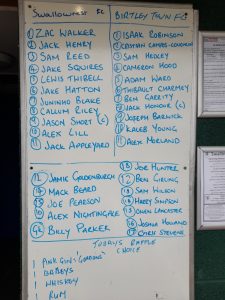 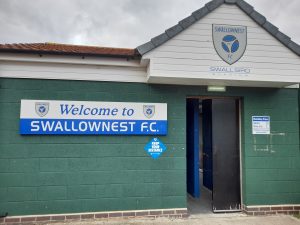 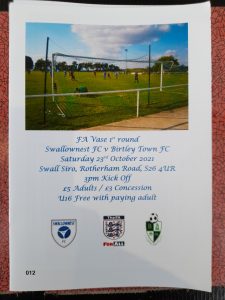 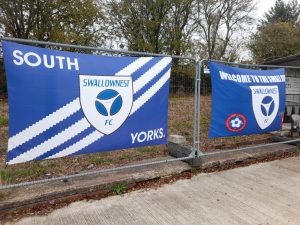