COLLIERS CLAW BACK A POINT 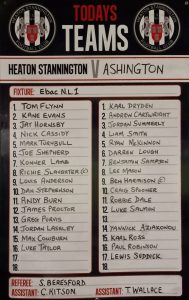 In a game of very different styles, Ashington managed to claw a point back after Heaton Stannington led for much of the match.

In the end the Colliers did enough in the second half to deserve the draw, but it shows the progress that Heaton Stannington have made during the season after their elevation from Division Two that they could well have secured all three points against one of the teams vying for promotion.

The home team almost got off to the perfect start – Louis Anderson intercepting a short back pass by Ryan McKinnon.  The No. 9 tried to place it past Colliers keeper Karl Dryden who was able to to pull off a top save and push the ball away, only for it to fall to Dan Stephenson who forced an even better save by the keeper on the line.

Then, for 20 minutes or so, the sides trades chances that were either off target or lacked power and direction to really trouble either keeper.  In the 21st minute, a hasty whistle prevented Heaton Stan from exploiting a good opening after play was brought back for a foul by McKinnon on Stan winger Konner Lamb.

They took the lead in the 27th minute with a well-worked goal – Anderson sending the ball across the area to Stephenson who bent the ball over and round Dryden.

Ashington created the better chances in the second half.  An early attempt came to Lee Mason who tried to lob Flynn from 30 yards out but the ball drifted wide right.  Minutes later he put another shot a foot or two wide.  Craig Spooner followed that up with a powerful, swerving shot that Flynn had to turn his body back to get an arm to the ball to pull off another good save.

With just over a quarter of an hour to go, Colliers manager Ian Skinner made four substitutions as the visitors tried to find a way through Heaton Stan’s well organised defence.  But it was Spooner and Harmison who crafted the equaliser – the No. 10 found Harmison who drilled the ball low and right to find the back of the net.

Both teams went in search of a winner in the closing minutes but it was Ashington who came closest with only three minutes left.  Spooner hit a rasping shot off the post, with sub Paul Robinson hitting the follow-up shot just wide.

The last chance came Jordan Lashley’s way.  The No. 15 was found with a long ball by James Proctor before he tried to lob it over Dryden only for the ball to drop tantalisingly wide. 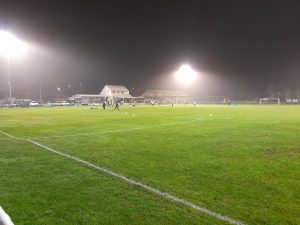 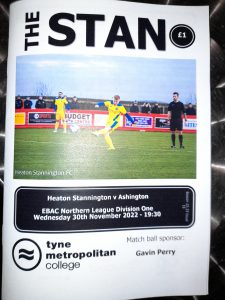