As a newly-promoted side, Crook have had a very encouraging season so far – sitting 8th after 16 games.  Undoubtedly, beyond their expectations before the season started.

But last night they came up against a Consett team in outstandingly fine form, a team that was simply too good for the hosts.  Consett were ahead after only three minutes and the visitors never looked back.  By half-time the match was effectively over.

Consett No. 9 Dale Pearson opened the scoring, getting on the end of a Jermaine Metz cross and drilling it home, catching the Crook defence cold.  The defence was caught napping 12 minutes later – a Consett free kick by Luke Carr was met by James Metcalfe who, unchallenged, hit the ball inside the right hand post.

Pearson almost turned provider in the 26th minute when he made a run down the left before sending over a cross that Ryan King was within a whisker of converting.  King made it three in the 29th minute, planting a header past Crook keeper Aaron Skelton after timing his run to meet a corner – a move that looked suspiciously like a well-rehearsed training routine.

At the other end, Crook were finding it difficult to get past Consett’s back line to threaten the visitors’ goal, with a Ben Reay off-target shot and a header over the bar the closest they came.

Pearson bagged his second in the 34th minute despite two great, successive saves by Skelton.  He blocked a Luke Carr shot, the ball dropped for Callum Guy, with Skelton making a second instinctive save only for the ball to rebound to the Consett No. 9 who lashed the ball in.  At 0-4 the game was done and dusted.

The last five minutes of the half were Crook’s best spell of the 45 – Joe Hillerby hitting a speculative shot from distance and an off-target effort by Reay.

Pearson completed his hat-trick four minutes after the re-start, taking a touch to take the ball round Skelton before scoring.  Five goals to the good, Consett then didn’t need to play with the same urgency and drive.

That allowed Crook to steady the ship, win possession and push forward more successfully in the second half.  They could have scored a couple of goals.

Jamie Tumilty saw a shot saved with his legs by Consett keeper Kyle Hayes and then No. 9 Edward Thomas placed a glancing header wide of the left hand post.  They came closest to scoring in the 66th minute:  Persistent work down the left by Toby Pascoe allowed him to send over a cross.  Thomas and Mason Hurworth both had back-to-back shots cleared off the line

Three minutes later, Consett came just as close to extending their lead.  A Callum Guy shot hit the post, with the ball rebounding to King.  His shot was blocked by Crook No. 6 Dale Elgie.

An emphatic win for Consett, but Crook probably deserved to get a goal or two. 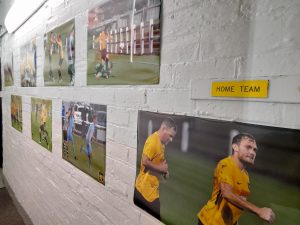 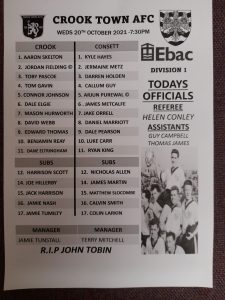 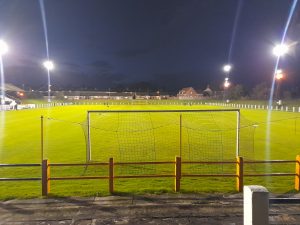