…by the proverbial cigarette paper

One of the Thornaby volunteers summed up the game:  “Two sides that cancelled each other out.”  You couldn’t get the proverbial cigarette paper between them.

In the end the all-Ebac Northern League tie was decided by a penalty kick.  It could easily have gone Thornaby’s way, instead Consett – finalists from two Vase finals ago – progress to the third round and await Monday’s draw.

The game got off to a scrappy start, with moves and attacks by both teams breaking down quickly.  Jake Orrell had the first shot in anger – bending the ball round the Thornaby defence but also round the outside of the right post.

Consett’s best moves came down the left, started by left back Oliver Scott pushing forward, while the hosts mostly depended on long balls up to their front men.  Their 32nd minute goal came with their best pass of the game – a long, cross-field ball from captain Lee Moore out left to Cyril Giraud who moved inside a defender before striking the ball crisply past Consett keeper Kyle Hayes.

Consett’s pressure down the left paid dividends just before half-time.  Scott found No. 9 Dale Pearson wide left; he sent over a low cross, met with a first time shot by Colin Larkin running in at the far post to make it 1-1.

The visitors started the second half with Ross Coombe in goal after Hayes was substituted after being injured in a 50-50 challenge with Thornaby No. 5 James Frazer towards the end of the first half.

Good chances were few and far between in the second half, with Consett failing to get close to the target with four shots and a free kick.  For Thornaby, Giraud hit a dangerous ball into the Consett penalty area but was unable to find a team mate.  He then tried an ambitious lob from 30 yards from the Consett goal, taken by Coombe under the bar.

Consett had to play with 10 men after Matty Slocombe was sent off for a second yellow card, with 20 minutes of the game to go, but Thornaby couldn’t take advantage of the extra man.

The penalty shoot-out saw the first two kicks missed.  The next three were converted by each side, only for Thornaby to miss their fifth penalty, leaving the way open to Pearson to blast the winner into the net.

It’ll be the Conny Army glued to their social media screens to see who they get in tomorrow’s draw.

PS – I enjoyed the contest between James Frazer and Dale Pearson – a good old-fashioned battle between centre back and striker. 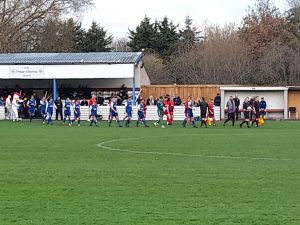 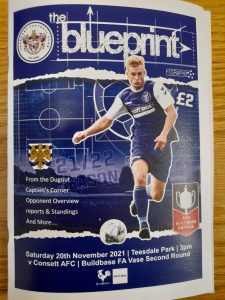 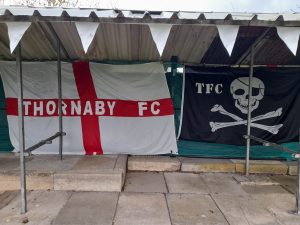 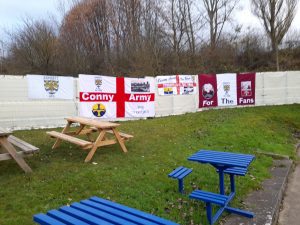 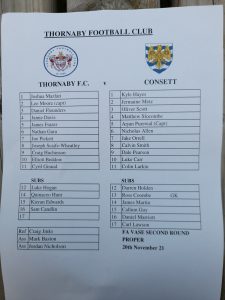