The FA Vase always draws up some interesting ties, however this must have been the tie of the third round.

Two of the top Northern League sides going head-to-head in such a crucial game was one that wasn’t to be missed.

Shildon came with a game plan – holding a compact shape before hitting Stockton on the counter – and it worked a treat.

The home side had the first chance of the game when Kevin Hayes skipped inside past Dom Curl, before seeing his thunderous effort tipped over by Shaun Newbrook.

The number 13 may be unlucky for some, but not for Dean Thexton, as he picked up the ball on the edge of the box before sending a glorious dipping effort over Ross Coombe to give Shildon the lead in the 13th minute.

Thexton almost made it two in the 33rd minute, as he ran onto Daniel Moore’s long ball, before his well struck half-volley was turned away by Coombe.

Stockton were dealt with a hammer blow on the stroke of half-time as Chay Liddle’s pinpoint through ball was met by Kurt Matthews, who placed his effort into the bottom corner to double their advantage.

The home side started the second half strongly, pushing men forward and forcing a few good saves out of Newbrook.

In the 73rd minute, a cross into the box fell to the feet of Nathan Mulligan, leaving him to strike home to half the deficit and bring Stockton back into the game.

The Railwaymen stood strong and almost added a third when Michael Sweet cut inside and hammered an effort towards goal, which was met by Coombe.

With Stockton struggling to break Shildon down, Thexton extended his side’s lead with a wonderfully placed effort into the top corner after good work from Sweet, to put the game beyond doubt.

Shildon held on for the win, which sees them enter the fourth round of the FA Vase along with Northern League rivals Hebburn Town and West Auckland, with Seaham Red Star a round behind. 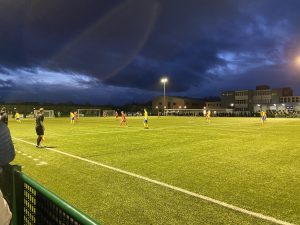 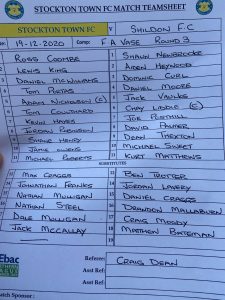