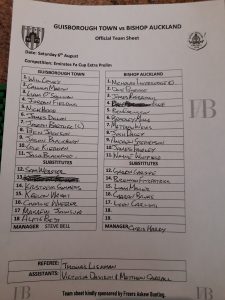 Going into yesterday’s FA Cup ties, Guisborough Town v Bishop Auckland looked the cream of the crop – both winning their opening two league games and Bishops scoring plenty of goals into the bargain.  The match didn’t live up to its potential.

The Priorymen were given an early boost when Bishops’ midfield Craig Gott was ruled out after picking up an injury.  The match certainly missed his quality in midfield.

It was a match that lacked a real spark, with two teams that were well organised and drilled defensively pitted against each other.  Both keepers will have had busier days.

Guisborough made the most progress early in the match, Jack Blackford making a couple of runs down the left and striker Jason Blackburn with a couple of (at best) half chances.  Meanwhile, Town’s defence were able to keep all of Bishops’ attacks in front of them.  It was all pretty comfortable for them.

The home team should have taken the lead in the 32nd minute. Blackford intercepted a Bishop Auckland pass and knocked it to Cole Kiernan but the No. 10 was caught in two minds as he ran goalwards.  It looked like he couldn’t decide whether to shoot or return the ball to Blackford.  In the end he hit it tamely towards a defender.

After that, Bishop Auckland started to make some headway going forward – James Risbrough hitting a ball into the goalmouth after making a strong run down the left, but no-one could get a foot to the ball to guide it into the net.  With only three minutes to go in the half, Kiernan hit a shot into the side netting.

After the break Bishops keeper Nick Liversedge was called on to make a rare save in the 55th minute, getting his hands to a Ben Jackson shot that was the best effort of the game so far.

And then, with just under 20 minutes to go, Bishop Auckland started to apply some quality pressure, with James Fairley the focus.  He hit one shot across the face of the goal and then had a free kick stopped close to the line by Jordan Fielding.  A quick break by the visitors released Fairley who turned a defender a couple of times before hitting a left-footed shot high and wide.

In the 77th minute they capitalised on their best spell of the match and hit the decisive goal.  Another Fairley shot came off a defender and went straight to sub Ciaran Banks who placed it between a couple of defenders and past keeper Will Cowey.

The Priorymen came desperately close to taking the game to a replay with two added time strikes at goal:  substitute Sam Webster hitting a blistering shot that hit the outside of the right hand post and then Nick Hood with an effort that forced Liversedge into a fine save to his right.  And with that, the visitors were through.

(PS – Hi to the two Guisborough fans who I was stood next to.  They were somewhat intrigued by my “It looks like Chinese” shorthand notes.  It wasn’t the result they wanted, but it was good to meet them.) 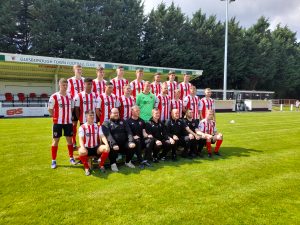 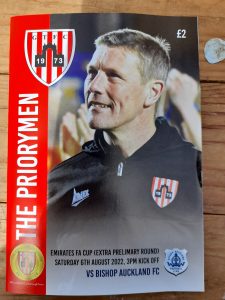 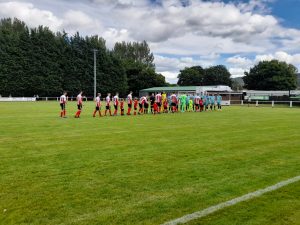