One hundred and seven hardy souls braved the cold and the biting wind – and they deserved to enjoy every minute of the drama that unfolded.

The wind was a crucial factor:  the team with the wind on their backs held the upper hand.  Both teams playing into the wind struggled for long periods to get much going.

The first half belonged to Synners.

They set out their stall when Ben Henderson had a shot blocked on the goal line, followed by a series of shots by Henderson and his striking partner John Howard.

Meanwhile Horden found it difficult to get out of their own half, only able to muster a couple of sporadic attacks.

The visitors took the lead in the 27th minute when Howard bent a 20-yard free kick round the wall, getting the ball past Horden keeper Graeme Pickering who seemed to slip at the crucial moment.

Synners doubled their lead thanks to Howard again, taking a ball from substitute Max Craggs and hitting a crisp shot into the net in the 45th minute, with Foz Garton hitting a long-range shot in first half added time, taken down to his left by Pickering.

The turn-round at the half saw a turn-round in fortunes, with Horden on the front foot, mounting most of the attacks and pressing the visitors back.  Synners keeper Jaan Yaqub was the busier of the two – producing a diving save to stop a Jack Maskell shot and then intercepting a cross before it could reach the Horden strikers.

Despite all their possession, Synners and Howard should have scored a third:  Henderson broke down the right, pulling the ball back to Howard who rounded the keeper only to see his shot blocked, with Henderson putting a follow-up shot wide.

With just over quarter of an hour to go, it looked as though Horden were going to fall short.  Yaqub managed to get to the ball just before a shot curled inside the post, with another Horden shot stopped on the line by a Synners defender.  Minutes later Maskell had another effort stopped with a diving save by Yaqub.

But, with only 10 minutes left, Horden managed to grab a goal.  A well-weighted ball found Joe Spalding wide right and he cut back inside before scoring with a crisp, precise strike.  That was quickly followed by two Maskell strikes, one of which came off his own player before hitting the bar.

Deep into injury time Synners almost snatched a third – Henderson with a quick break down the right before hitting the side netting.  The game looked to be all over…..until.

Until the third minute of added time and the last Horden corner of the game.  They piled everyone forward, including Pickering and the keeper launched himself and scored with a header any striker would have been proud of.

A dramatic ending that the crowd deserved.  A good match, in difficult conditions.

And thanks to Jordan Clarke for the action photos from last night’s game: 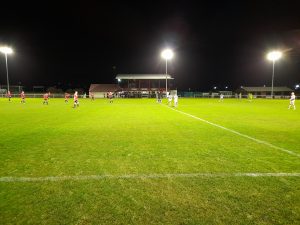 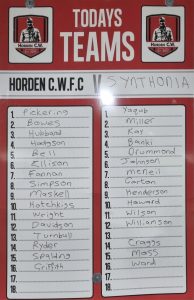 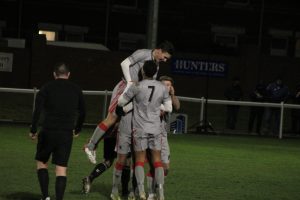 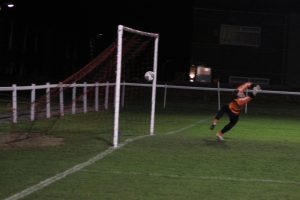 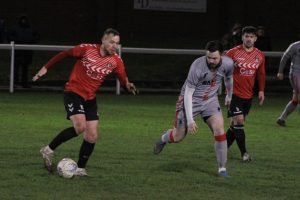