DESPAIR AND RELIEF AT WHICKHAM

The last kick of the game produced despair and relief in equal measure.

Despair for Whickham who had tenaciously held on to their slender, one-goal lead for more than half an hour with stout defending.  Relief for North Shields who had looked as though they couldn’t find the key to unlock the home side’s defence.

Whickham were within seconds of victory when Robins sub Cameron Cunningham dispossessed a Whickham defender close to the byline and passed it back to No. 9 Dan Wilson.  One touch and then he pulled the trigger to score past keeper James Anderson.  The 92nd minute and referee Chris Armstrong blew for full time as soon as the game re-started.

Shields deserved the point, but that won’t be any consolation to the Lang Jacks.

For all the attacking by both sides, the defences held firm for the first half.  They both had decent chances.

For Whickham:  Mark Fitzpatrick sending an effort across the Shields goal; George Priest beating the offside with a shot at keeper Oliver Marshall; a lightning quick break with attackers outnumbering defenders, with Priest’s shot saved with his feet by Marshall; a ball into the Shields six-yard area spilled by Marshall but mopped up by Anth Myers.

For North Shields:  In the 5th minute a superb free kick by North Shields right back Andy Cartwright that Anderson, at full stretch, managed to push away; an Adam Forster shot stopped by Whickham’s No. 5 Kieran Galbraith; a shot by Paul van-Zandvliet punched away for a corner by Anderson; and then their best opening with seconds to go in the half – Wilson getting a foot to a ball only to hit it against the underside of the bar.

Whickham were up and running straight away in the second half;  Priest with a half-volley put over the bar and then, with their closest effort, Fitzpatrick with a swerving shot that was heading for the inside of the right hand post before Marshall managed to get to it, sending the ball out for a corner.

The deadlock was broken in the 57th minute.  The ball bounced around the North Shields area from a corner, Whickham claimed a handball but then Ben Milburn pounced on a loose ball to strike it in to put the home side 1-0 up.

Shields then started piling on the pressure, with Wilson their main threat.  He put one header across the Whickham goal only for it to go the wrong side of the post and then he had a couple of shots stopped by Kieran Galbraith.

In between all that, Whickham captain Dale Burrell dispossessed van-Zandvliet before instigating a three man moved involving Fitzpatrick and Zak Atkinson before No. 7 Alex Francis put a shot wide left.

The game then entered the nervous 80s – nerves for 10 minutes as Whickham tried to close out the game and nerves for Shields as they pushed for the equaliser.  They found it, but only right at the death. 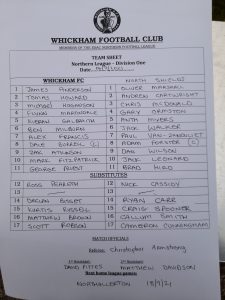 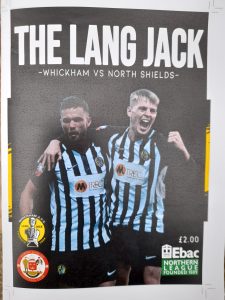