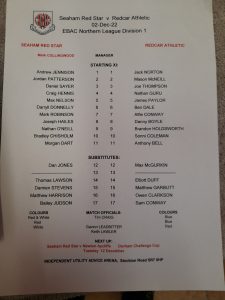 8 out of 10 for effort, 2 out of 10 for style and elegance.  It was all blood and thunder at Seaham last night, with the ball taking a bit of a pounding.

There was precious little time or space allowed by either team as they scrapped for the points.  In the end, one of the few bits of quality decided the match and saw the points go Redcar’s way.

The visitors could well have extended their lead – hitting the woodwork three times.

As you’d expect, there were plenty of robust, sharp tackles in the opening minutes but the game never settled into one that allowed for many moves to last more than a couple of passes, with players closed down almost immediately and little opportunity for flowing attacks.

Having said that, there were some promising moves:  Nathan O’Neill putting a shot just wide for Red Star and Danny Boyle not missing the target by much as he tried to curl a shot into the top right hand corner for Athletic.  Team mate Anthony Bell came closer – hitting a powerful shot that cannoned off the bar.  Red Star answered with a shot by O’Neill that was pulled across the keeper and goal and then a cross that fizzed across the Redcar area without a Red Star player able to connect with it.

But in the main, the ball continued to be thumped around a lot rather than any measured passing.

Three minutes after the re-start Redcar hit the woodwork again – Sonni Coleman pulled the ball back for Boyle whose first time shot hit the left hand post and came back out.  They took the lead in the 59th minute.  A free kick was put into the Seaham area but was only cleared as far as Brandon Holdsworth who placed a looping header over the defence and keeper, into the top right hand corner.

Red Star No 7 Mark Robinson tried his best to bring a bit of quality to the play – twice coming close to scoring.  He hit a free kick into the Redcar area, the ball came straight back out to him and he fired a shot the forrced Athletic keeper Jack Norton into a fine save.  Robinson followed that up with a low shot that Norton pushed away at full stretch.

The last time the visitors hit the goal frame came with five minutes of the 90 to go – Alfie Conway with a bullet strike that came back off the inside of the left post.  But in the end Holdsworth’s goal was enough to secure the three points. 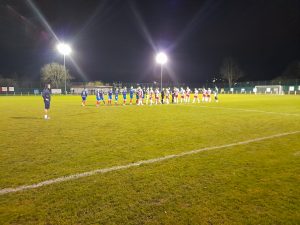 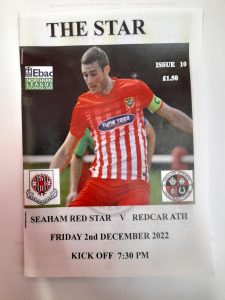 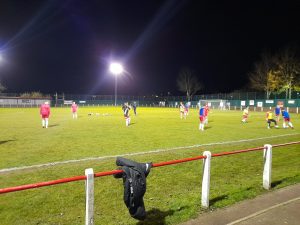 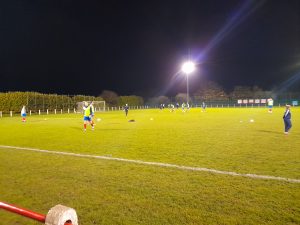