ESH BREAK THEIR AWAY DUCK

Esh Winning secured their first league away win of the season thanks to getting the fundamentals right:  hard work, team work, a keeper who made some important saves and a striker who made the most of his scoring opportunities.

But it was Town – and Jack Pounder in particular – who made the early running;  the No. 9 getting on the end of a Harry Close cross only for his header to hit the bar.  Minutes later another header flashed across the face of the Esh goal.

The visitors took the lead in the 20th minute, against the run of play – a throw in landing at No. 9 Joe Bates’ feet, with the striker taking it across a defender before thumping a long range powerful shot between keeper and post to put them 1-0 up.

He almost doubled his tally seven minutes later:  Niall Smith with a neat back heel to release Owen Lister.  His pass to Bates allowed the No. 9 to hit a shot that forced a diving save by Billy Town keeper James Winter (who’ll probably need a couple of throat lozenges, given all the shouting, goading and encouragement he bellowed over the 90 minutes).

After an encouraging start, it wasn’t until the closing 10 minutes of the half before Town starting to attack with any real threat:  Robbie Bird sending over a cross, but with no team mate close to getting on the end of it, and then a good cross by David Gordon intercepted by Lewis Heap in front of goal before Pounder could connect.

Pounder thought he’d scored in the 51st minute – beating Esh keeper Jak Wells to a cross and planting the ball into the net only to be ruled offside.  He followed that up with a powerful header but hit it straight at Wells.

In the 61st minute Esh doubled their lead – thanks to persistence by Bates.  He charged down an attempted clearance by Winter and then had the simple task of prodding the loose ball into an empty net.

Their lead was preserved with back-to-back saves by Wells.  He was able to tip a David Gordon free kick over the bar and, from the corner, pushed a glancing header by Kyle Davis away to safety.  And then, with less than 15 minutes to go, a cross by Gordon came to sub Kyle Bell but the No. 15 couldn’t force the ball past the Esh keeper.

In the closing minutes Robbie Bird drilled a shot just wide of the post.  It summed up their night.  They had their chances but just couldn’t convert them.  Meanwhile, solid defending by Esh Winning allowed them to see the game out. 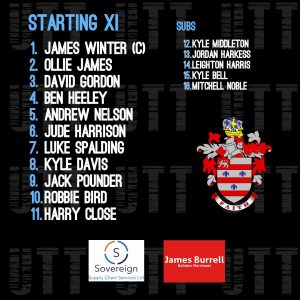 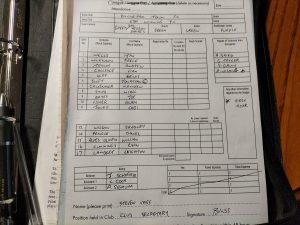