It was simply great to be back at a game.  No crowd restrictions, refreshments available and meeting up with fellow ground hoppers who I haven’t seen for months and months.

And the traditional curtain raiser for the new Ebac Northern League season was a decent, competitive match too.  After two covid-ravaged seasons, everyone has their fingers crossed that we manage to run a full season of league matches this time round.

Pitched against each other:  Hebburn.  Once of this manor.  Vase winners and leading the way in the first division before last season’s “curtailment” and now on the verge of an exciting chapter in their history.  And West Auckland, whose tenure of the League Cup has lasted a bit longer than the usual season and winners of the Durham Challenge Cup.

West are only a week away from starting their league campaign while Hebburn still have a couple of weeks of pre-season training and friendlies, but there were more than enough incidents to keep the 276 crowd entertained.

In the 4th minute, a mix-up between West defender Jamie Harwood and keeper Ross Coombe almost allowed Hebburn striker Amar Purewal in, only to be beaten by Coombe scrambling back to gather the ball.  Olly Martin then tried to lob the ball in, only missing right by a foot or two.

At the other end, West’s Leon Scott couldn’t get enough power or angle to a shot after turning the defence.  Halfway through the first half, Hebburn were on top, with Darren Lough putting a header just over the bar, but they weren’t testing Coombe.  Most of their attacks came down the right, with Ali Alshabeeb the main outlet, while West’s right winger Kyle Fryatt twice came close to beating the offside trap.

The best save of the half came in the 39th minute when Alshabeeb put Martin through, only for Coombe to block his shot with his legs.  Four minutes later West were ahead when referee Alex Clark awarded a penalty for handball by Mark McLeod.  Arron Thompson stepped up and converted the spot kick to send West into the break a goal to the good.

Good teams find another gear.  Straight after half time, Hebburn found another couple of gears.  In the first minute of the re-start, Lough forced another save out of Coombe who had to dive right to nudge the ball clear.  Tom Devitt hit a first time half-volley what scraped wide of the left post.  In the 49th minute they were level when another effort by Martin was again stopped by Coombe only for Devitt to plant the ball into the net.  The chances kept on coming:  Alshabeeb having a shot saved by Coombe and then Martin finally got the better of the keeper in the 55th minute when he hit a precisely-executed free kick round the wall and in between keeper and post.

To their credit, West didn’t wilt.  Close to the hour mark they were able to mount three attacks without being able to capitalise on the moves.

Coombe capped a fine performance by diving down to his right to deal with a long-range Robbie Spence shot, but fellow substitute Brian Johnson sealed the victory when he struck the ball from distance to make it 3-1 in the 83rd minute. 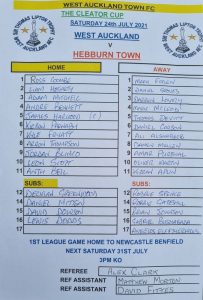