HORDEN MAKE IT SIX IN A ROW 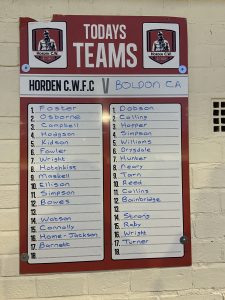 Horden’s sixth win in a row saw them move one point from the top of Division Two after a compelling victory over Boldon.

Boldon started the brighter of the two sides and had a couple of chances to take the lead before the half hour mark – Finlay Neary fired over from the edge of the area before Kain Reed’s low strike was well turned away by Craig Foster.

The breakthrough came 30 minutes in. A corner found Jack Maskell at the back post.  He saw his goalbound header saved by Callum Dobson before Ross Kidson turned home from close range.

Horden dominated the second half, reducing Boldon to half chances whilst they extended their lead.

Horden’s second came with a stroke of luck. Liam Wright’s looping cross evaded Dobson and hit the post, before trickling along the goal line before eventually being turned home by Josh Home-Jackson.

The second half was comfortable for the hosts – Boldon lacked quality in the final third as the majority of their attacks broke down at the final hurdle.

The hosts added a third in the 90th minute thanks to a moment of brilliance from Home-Jackson. The substitute picked up the ball on the edge of the area before curling home into the top right corner.

Boldon added a consolation deep into stoppage time. Luke Collins produced a moment of quality – which Boldon had been lacking all game – as his first time strike from 25 yards out nestled into the top corner.

Horden move into third with the win, whilst Boldon remain in 10th. 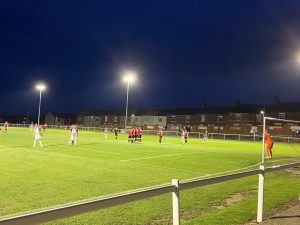