Two factors conspired to make this less of a contest than it might have been.

A strong, gusting wind put paid to any hopes of flowing football, as both teams battled to make any fluent headway.  And the sending off of Seaham’s No. 2 Joshua Baggs in the 14th minute put the home team on the back foot for the rest of the game.

To their credit, West made the most of their man advantage.  3-0 at half-time, the second half was all about damage limitation for Red Star – an objective they achieved.

West No. 2 Liam Hegarty provided the early threats for the visitors – sending over a couple of dangerous crosses from the left.  The second was cleared for a corner, from which Baggs handled a powerful header on the line.  Arron Thompson tucked away the subsequent penalty, giving Red Star an uphill task.

West pinned Red Star back for much of the rest of the half and bagged themselves two more goals – both by No. 9 Jordan Blinco.  He was close to opening his account in the 34th minute – getting close to a cross from the left.  The first came seven minutes later with a quick, clean break from the back by West, with Anthony Bell passing the ball out to Blinco who took a couple of touches before rifling it past Andrew Jennison in the Seaham goal.

And then in added time, he got on the end of a ball in from the left by Hegarty, with his shot going in off the post.

From there, it just seemed a matter of how few goals Red Star would concede from then on in.  They did better than that.  They were able to keep a clean sheet in the second half and played much better (against the wind**) after the break, without looking as though they were going to score.  Their best move and shot came in the 57th minute when Danny Sayer provided a cross for Louis Anderson, whose header went wide.

For their part, West’s Andre Bennett made a couple of dangerous runs down the right.  With the wind behind him, Gary Browne tried a shot from just inside the Seaham half that only missed the target by a couple of feet, while Kieron Parnaby saw a shot also go wide.

Seaham held their own and everyone seemed pretty content for the game to close out at 3-0.

(* Headline for any Graham Parker and the Rumour fans out there, for what is, I suspect, a very niche audience.

** For any Bob Seger and the Silver Bullet Band fans out there, for what is, I suspect, a very niche audience.) 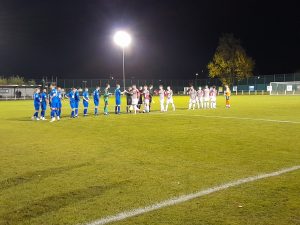 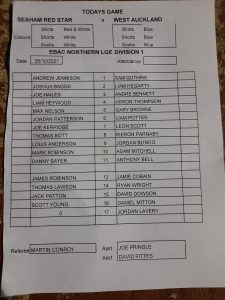